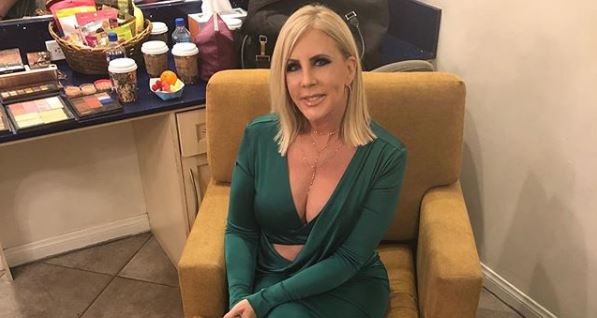 Vicki Gunvalson of The Real Housewives of Orange County is sharing that she is about to be engaged. It looks like things are going great with her boyfriend Steve Lodge. He hasn’t popped the question just yet, though. Vicki did a live Instagram chat and talked to her fans about their future plans.

Vicki shares why she thinks engagement will be soon

She shared that on the plane trip to Puerto Vallarta, Mexico with Steve he told her that an engagement is coming. It sounds like they even plan to get married there in the future. Vicki didn’t share how soon she thinks the ring is coming, though. You know that the RHOC cameras will be there for the proposal. Fans can’t wait to see it happen.

Vicki shared her thoughts on Steve. These two are obviously very serious. Here is what she had to say.

Vicki and Steve are a perfect pair

Vicki Gunvalson has been through some rough relationships over the years. It looks like she has finally found the man she wants to spend the rest of her life with, though. Sometimes it takes a few bad ones like Brooks Ayers to find your true love.

Steve and Vicki love to take vacations together. She is actually working on a new travel series that is called Vacation With Vicki. That is what they were doing in Mexico. If Steve pops the question during a trip like that, then Vicki might not even know it is coming.

Do you think that Vicki Gunvalson and Steve Lodge will get married? Let us know in the comments below.

‘Big Brother’ Spoilers: Was The Power Of Veto Used This Week?
‘My 600-Lb. Life’: Whatever Happened To Justin Assanti?
Lori Loughlin Asks Permission To Film In Canada: Is She Returning to ‘WCTH’?
‘Today’ Why Are Hoda Kotb & Savannah Guthrie Feuding?
‘Today’ Savannah Guthrie Makes On-Air Blunder?