General Hospital spoilers for March 28-April 2, 2022, reveal Esme Prince causing more trouble than ever all over town and it’s just part of her ultimate plans.

As Josslyn Jacks (Eden McCoy) said the other day, Esme (Avery Kristen Pohl) is like Nelle 2.0 but possibly even more deranged. Although Esme told Spencer Cassadine (Nicholas Alexander Chavez) she may be pregnant, that doesn’t mean she actually is.

The show is keeping that vague as Esme turns on the charm and the waterworks for Nikolas Cassadine (Marcus Coloma) and convinces him to allow her to move into Wyndemere. This may not sit well with Ava Jerome, (Maura West) but Nikolas feels bad for the young woman who claims she has nowhere to go. After all, Ryan Chamberlain (Jon Lindstrom) did order her to break up Nikolas and Ava in any way she can.

Meanwhile, Jordan Ashford is forced to arrest poor Trina Robinson (Tabyana Ali) when that burner phone with the sex tape Esme snuck into Trina’s purse is found. Josslyn, Cameron Webber (Will Lipton), and Spencer can barely believe this and of course, they wonder if Esme had something to do with this. Will they be there to save a devastated Trina? 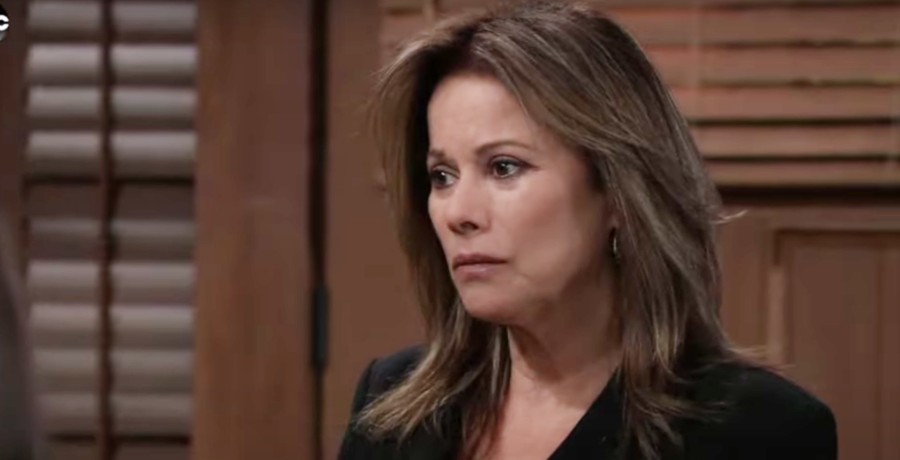 Harmony Moves In With Alexis

Molly Lansing Davis (Hayley Pullos) and TJ Ashford (Tajh Bellow) are stunned when Alexis Davis (Nancy Lee Grahn) announces that Harmony Miller (Inga Cadranel) is moving in with her. Molly does not trust Harmony at all, especially after what she did to Kristina Corinthos (Lexi Ainsworth). Alexis balks at Molly’s concerns, but then she has her own worries when Harmony is in her house for the first time and seems to know her way around pretty well.

We also learn via Phyllis Caulfield (Joyce Guy) and Harmony’s own flashbacks that Harmony knew Madeline Reeves (Donna Mills) pretty well back in the day.

Sonny Corinthos (Maurice Benard) is getting more involved with the mob business again now that he is entering into a partnership with Selina Wu (Lydia Look). This prompts him to call in the big guns when his security expert, Brick (Stephen A. Smith), pays a visit and assures Sonny that all is well. Meanwhile, Nina is still frustrated at having no luck with seeing Wiley and gets advice from Scott Baldwin (Kin Shriner).

Finally, the Deception ladies are ready to have a party for becoming a public company, but they need entertainment. Will they get it in the form of Harrison Chase (Josh Swickard)? The Face of Deception also finally returns from her honeymoon and everyone is surprised that Sasha Gilmore (Sofia Mattsson) and Brand Corbin (Johnny Wactor) got married. Will anyone notice she is on drugs again?