OutDaughtered star Danielle Busby recently shared a picture of her six daughters that showed off their fiercely independent sides. The photograph quickly struck a chord with Danielle’s fans and followers. It’s not often Danielle Busby isn’t entirely in control of what her kids wear. However, recently the busy mom of six threw caution to the wind and allowed each of her younger daughters the ability to do something different with their wardrobe.

Of course, this is nothing new for the oldest of the OutDaughtered sisters, Blayke. But for Blayke’s younger siblings getting a chance to decide on their own wardrobe options was a HUGE deal. Plus, that was not the only taste of independence the Kindergarteners experienced. Continue reading to see all the excitement the quints had this first week of Fall.

OutDaughtered: Danielle Caves In And Allows The Quints To Ride The Bus

OutDaughtered personality Danielle Busby usually drives her daughters to school. Like many stay-at-home moms, she is used to the routine of drop-off and pick-up lines at the local elementary school. Likewise, she plans her daily schedule around that activity. However, since the quintuplets all started attending public school this year for kindergarten, they have been begging Danielle to let them take the bus to school like the big girls they have become. Of course, Danielle was reluctant to grant their request. Finally, this week she caved in and let the girls ride the bus to school with their friends.

Indeed this is a massive milestone for the OutDaughtered quints. No one ever forgets their first taste of independence. This was the first time Danielle and Adam Busby let go of being helicopter parents. The quints relished the opportunity. Perhaps riding the bus will become a regular thing for the girls. Time will tell as yesterday was the first time they took the bus. However, by the smiles of all the sisters after getting off the bus, it appears it will not be their last. 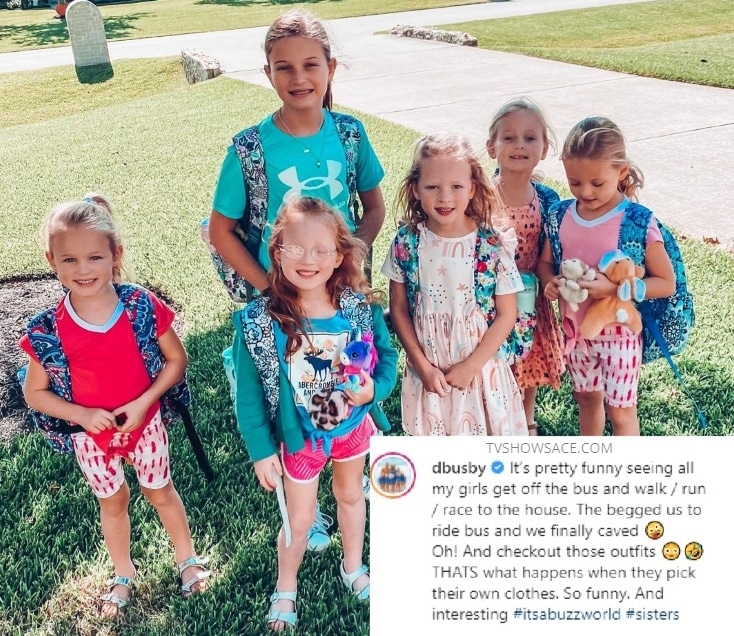 OutDaughtered quints, Ava, Olivia, Parker, Riley, and Hazel Busby typically all dress identical to each other. Fans often wondered if the girls really wanted to dress the same or was it Danielle that preferred all her younger girls to be dressed the same. Well, we finally have the answer to that question. It appears from the latest photo Danielle shared the girls like to be different from others.

So clothing is a way for each OutDaughtered sister to express her unique style and independence. It’s not often Danielle allows them to do this, but they jump all it over when they get the chance. After all, their big sister Blayke doesn’t have to dress to match them, so why should they have to dress alike?

Make sure to check Tv Shows Ace often for all the latest OutDaughtered news and updates.