Real Housewives Teresa Giudice and Kyle Richards are teasing fans about the upcoming Peacock series The Real Housewives Ultimate Girls Trip. Both Teresa and Kyle took to Instagram sharing the same photo with their followers.

The photo reveals Kyle and Teresa posing on the beach while vacationing and working in Turks and Caicos. The background is beautiful. However, the women’s Instagram followers immediately noticed something about Giudice looks a bit off.

While fans reveal they are excited for the new series to begin, many had a lot to say about the way Teresa looks. The RHONJ star is wearing a stunning white bikini, headband, and large diamond hoops; however, Giudice’s lips stole the show.

“Oh No! Stop getting fillers!! It looks so bad!,” another advises.

One more writes, “What’s up with her lips, not good.”

Another directed their remarks to the RHOBH star, “Kyle, be a friend; tell Teresa to stop with the lips.”

One more claims “Kyle, You did Teresa dirty choosing this pic.”

The Instagram public is speaking, and they all seem to agree that Teresa Giudice is taking the lip plumping way too far. While the photo supposedly means to pump up the excitement for the new series, Teresa’s fans claim their concern is growing for her New Jersey reality star.

Fans of the Real Housewives franchises only hope by speaking out that they can help Teresa Giudice see the path she is taking with all the cosmetic procedures is not a good one. On the other hand, Kyle Richards appears stunning in the photo, which is a plus-up for Kyle. 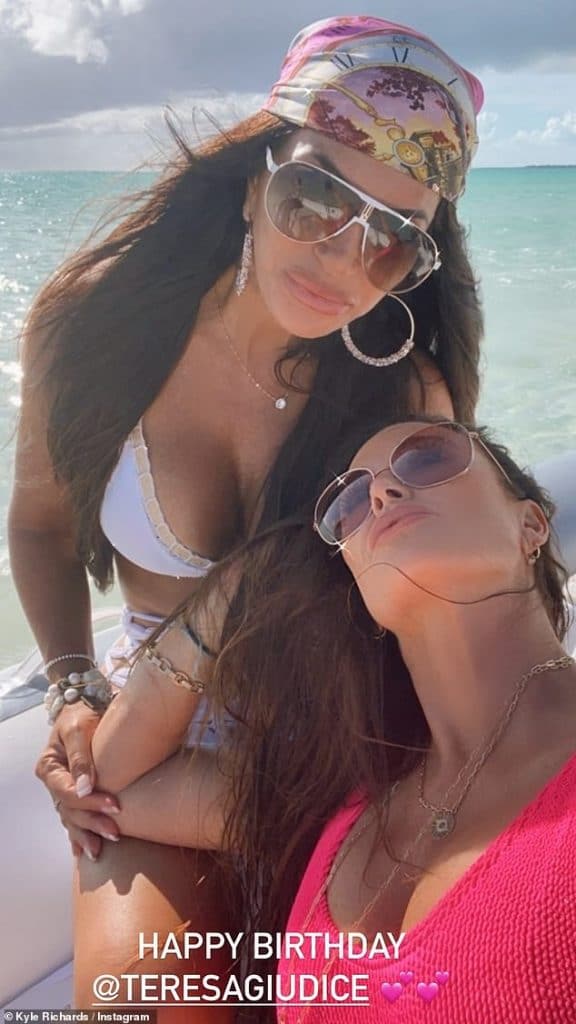 As for the series, fans are anxiously awaiting the debut. Many believe it will be pretty interesting mixing the wives outside of their normal elements and friend groups. The series will follow several women from Bravo’s Real Housewives franchise as they go on vacation together. The first season is set to premiere in November 2021.

The Peacock reality series will star Kyle Richards, Teresa Giudice, Melissa Gorga, Cynthia Bailey, Kenya Moore, Luann de Lesseps, and Ramona Singer. It will be interesting to see which wives become friends and where the drama and chaos will develop?

Many fans have commented that should a third season occur, they believe it would be interesting to see Lisa Rinna, Denise Richards, Camille Grammer, Lisa Vanderpump, and Kim Richards among the cast members.

How do you feel about the Peacock housewives vacation series? Is it something you will watch?

Courtney Waldrop Shares How Shockingly Tall Saylor Is Now
‘Long Island Medium’ Theresa Caputo Shocks With Fresh Hairstyle
The Real Reason Rob Kardashian Was Not At Kourtney’s Wedding?
‘The Bachelor’ Paid HOW MUCH To Film In Texas?
Kim Kardashian Shares What Her Ultimate Goal With Kanye West Is