Scott Disick’s exes Sophia Richie and Amelia Gray Hamlin should become best friends. The two women have so much in common these days and would have so much to talk about!

Sofie Richie reveals she “sympathizes” with Amelia Gray Hamlin. When it comes to Scott Disick’s exes these two women could write a book. They both know what it feels like to walk in Kourtney Kardashian’s shadow.

Richie reveals she ‘always felt’ Scott never got over Kourtney, and hearing about Amelia and Scott’s split doesn’t surprise her. But, for Disick’s exes, it is hard not to know that Scott is not now or ever plans on getting over Kourtney. He is very vocal about how deep his feelings are for Kardashian. He even tells everyone he would get back together with her in an instant if she wanted.

Sources close to Richie reveals her sympathy for Hamlin, according to Hollywood Life.

“It really doesn’t surprise Sofia that Amelia called things off with Scott,” the source says. “She kind of suspected that their relationship wouldn’t last forever because of some of the similar issues she experienced herself while they were together.” The source says one “hot button” issue was Sofia’s belief that Scott “never fully got over” the mother of his children.

Scott’s recent relationship blunder has to be his biggest to date. Not only has he blown his relationship with Amelia Gray, but he also has all of the KarJenner women upset over his actions. 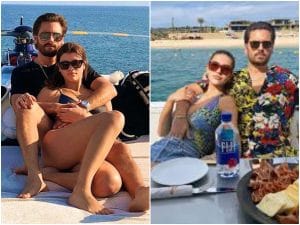 KUWTK fans are all continuing to wonder what was Scott thinking when he sent a DM to Kourt’s former ex, Younes Bendjima. Did he not consider the effect sending such a message about Kourtney would have on Amelia?

When Will Scott Disick Learn?

Most likely not because Kardashian fans are well aware that Scott is an impulsive person, and over the years, made many bad decisions without thinking first. Kourtney and Scott have always prided themselves on maintaining a friendly co-parenting relationship for their three kids, Mason, Penelope, and Reign.

But now, it seems as if Kourtney is only remaining friendly when it comes to the kids. She is over Scott and makes sure everyone knows how happy she and Travis are together. Kardashian and Travis Barker are hot and heavy in their lust for each other. Barker appears to have brought out a side of Kourtney that no one else has managed to.

Kourtney is also cool with packing on the PDA with Travis. Recently the reality star posted a shameless plug for an NSFW bedroom adult toy. On her Poosh site, Kourt tells her followers that they will not be disappointed with the bedroom belt. Kourtney wants her fans to know that she gives her full product approval as a satisfied customer! She can’t make it any more clearer to Scott Disick that she is no longer interested in him in any way.

As for Sophia Richie and Amelia Gray Hamlin, fans believe they would make great friends and would love to see these two hanging out together.