Kourtney Kardashian continues to be on full speed ahead in her steamy romance with Travis Barker. If KUWTK fans have yet to get enough of Kravis’ daily dose of public PDA, wait until you get a load of her latest love advice!

The 42-year-old reality star and mother of three is shamelessly promoting an NSFW bedroom adult toy. Kourtney wants her fans to know that she does not only approve of the product but is also a satisfied customer!

Kardashian promotes the Munkeybarz S*x Belt via her Poosh website, telling her followers that they can add a little extra excitement to their lives with this product. She also claims that it is well worth the $100 it costs.

“Treat yourself and your partner,” it read. “You won’t be disappointed.” 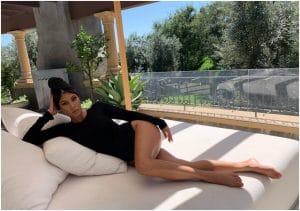 The bedroom belt description claims the belt doubles as love handles for your hips. It also claims that it is a “one-of-a-kind position-assisting device” that works wonders for couples.

Okay, and to think only yesterday Kourtney’s sister Kim’s most significant issue was having North West and Penelope Disick call her out on her “fake” Instagram voice. So Kourtney is going to one day have a lot explain to her children!

Kardashian fans get that Kourtney is madly in love with Travis Barker. They even get the occasional PDA photos, but the constant love displays have some believing enough is enough already. Many fans believe Kourtney is attempting to regain her youth. Others claim her behavior is clearly due to a mid-life crisis.

Explaining Her Life To The Kids

Kourtney’s public PDA with Travis is causing a rift among the family, especially for Scott Disick. As previously reported, Scott recently took to Instagram to send out a DM to another of Kourt’s exes, Younes Bendjima.

Scott blasted Kourtney in a private DM believing Younes would most likely agree with him. Instead, Younes leaked the message publicly. Since then, Scott is now in the doghouse with all the KarJenners. In addition, the social media blunder has cost him his relationship with Amelia Gray Hamlin.

Kourtney Kardashian is now icing Scott out. According to In Touch, an insider reveals that Kardashian does not concern herself with Scott Disick or his love life; she focuses on her and Travis’ life. 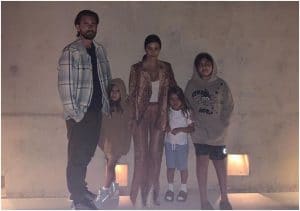 As for their relationship, they will continue to amicably co-parent their kids Mason,11, Penelope, 9, and Reign,6. However, Kourtney Kardashian may want to start prepping that talk she will be having with her kids about mommy’s public-private life. This is not the kind of stuff kids want to hear about.

Seriously, fans are happy Kourtney Kardashian and Travis Barker are in love. But for the sake of adding any more embarrassing moments to her children in the future, she may want to heed her follower’s advice and dial it back sooner rather than later.