North West is at it again. The 8-year-old daughter of Kim Kardashian and Kanye West is calling it as she sees it, or in this case, hears it. North is having a lot of fun sneaking up on her mom Kim’s Instagram stories.

North claims Kim is using a fake voice when she films on social media. According to her adorable daughter, the Daily Mail reports that the KUWTK star has two voices she uses.

One voice she uses she reserves for her four children, North, Saint, Chicago, and Pslam. Then there is voice number two. The one she uses on social media per North is also known as the ‘fake’ voice. North West creeps in on Kim while filming her Wednesday Insta story and immediately calls out her mom, asking why she is talking ‘different.’

Kardashian begins defending herself, saying, “I don’t talk different. I am the same human being.” 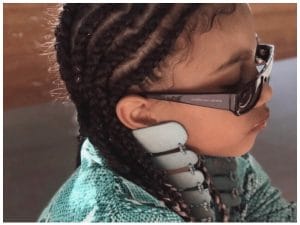 ‘Hey guys I just got my new Boxy Charm and I want to share with you all of the super cute, amazing things,’ she then pauses and smiles before adding: ‘My daughters is here trying to hate on my Boxy Charm.’

She says then snaps, ‘Hey get out of my video!’

Kardashian is clearly in work mode. North, however, is having none and continues to interrupt her mom several times. Kim’s followers can tell she finds her daughter’s interruptions annoying. But North continues to bug her mother, shoving an apple near her face a few times.

“Northie, stop, that is so annoying!” Nort on the other hand is not finding her mom’s annoyance bothersome at all.

‘Roaaaaaaaaaaaar,’ says North as she amps up her photobombing by making an animal noise with the apple still near Kim’s face. Then it happens, North West puts Kim Kardashian on blast.

Kim attempting to save face, asks her followers ‘For my videos? I don’t talk different I am the same human being,’ argues the KUWTK veteran. ‘Guys do you think I talk different when I talk about contour?’

A ‘yeah’ is heard in the background.

The outgoing eight-year-old then begins imitating her mom’s Kim Kardashian voice with a whiny, over-the-top tone while discussing makeup.

Kim then seeks out a second opinion by asking Penelope Disick if she really does talk differently on film? Then Penelope turns on her auntie saying “yes.” 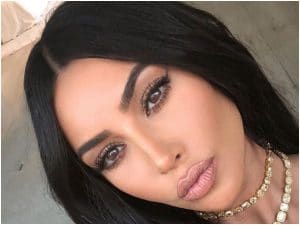 Give It Up Kim Kardashian

It looks as if Kim is clearly outnumbered on this subject. Penelope and North play in Kardashian’s glam room, having the time of their lives playing in her makeup and putting fake eyelashes on fruit.

The reality star then goes into mom mode and tells the girls they are cleaning up when they are finished. ‘I am mad that you leave a mess like this,’ says stern Kim.

This Insta invasion is not the first time North West has mocked her mom. However, it looks as if Kim better get used to her daughter’s intrusions and honesty. She has no problems saying whatever she has on her mind to whomever.

But many of Kim Kardashian’s social media fans will admit, North West is not wrong. Just check out any of Kim’s social media video shares; she does seemingly sound different.

Fans can’t wait to see what other issues Kim Kardashian and North West will be facing off on as North navigates her teenage years. All they can say is Kim better be paying close attention to North’s social media pages then; who knows what KarJenner secrets will be coming out as their children grow up and continue speaking out?