Chloe Chrisley got sassy with daddy Todd in a video clip featured on Instagram recently. The official Instagram account for Chrisley Knows Best has been uploading lots of video clips lately. This is largely in promotion of the new season of Chrisley Knows Best and Growing Up Chrisley. One video uploaded to the profile a few days ago featured Chloe getting extra sassy with Todd. Julie Chrisley could be heard cracking up in the background as she was HERE for the fire in the belly of this feisty little one.

In a video clip uploaded to Instagram, Todd appears to be helping Chloe with some homework. Todd asks his daughter/granddaughter how to spell the word “brilliant.” Chloe is pretty quick to respond. Her response, however, isn’t what Todd was expecting. Instead, she got sassy.

“C-H-L-O-E,” Chloe spelled back in response to Todd’s question. Julie could be heard cracking up in the background as Chloe put Todd in his place by spelling her name out in response to how to spell the word “brilliant.”

“Mhmmmm,” Chloe added as she doubled down on her response with a very “she said what she said” attitude.

Todd Chrisley was clearly a bit taken back by the sass of his daughter/granddaughter. He questioned if she really just doubled down on her answer after spelling her name and insisting it was how the word “brilliant” should be spelled.

Considering Chloe Chrisley has big sister/aunt Savannah to look up to, no one is too surprised to see the little one is so full of sass. 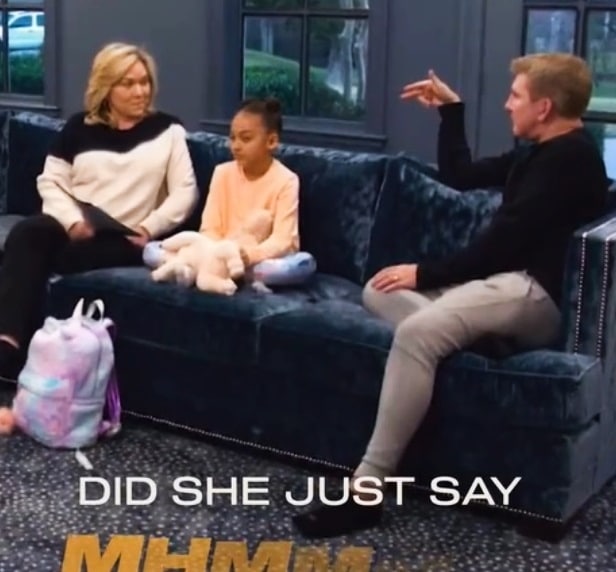 Fans of this reality TV family were cracking up in the comments. Most noted that she was clearly the offspring of Todd. There was some debate in the comments regarding whether she was Todd’s daughter or granddaughter. But, it was clear she had his DNA.

For the most part, Chrisley Knows Best fans were here for this sassy side of Chloe. They loved seeing the beautiful young lady she was growing up to be.

Are you here for this sassy side of Chloe Chrisley? Share your thoughts with us in the comments. And, keep coming back for the latest on this reality TV family.