Jenelle Evans denies that she has any problems with alcohol. She also claims she is getting tired of fans who claim she does. According to The Sun, the former Teen Mom 2 star states she is ’29 and can drink when she wants to.

Evans claims she is getting sick and tired of people calling her out because she always has a drink in hand when she films her social media videos. Jenelle blasts commenters about her drinking on her recent TikTok share. The mother of three singles out one comment in particular about how she switches to wine instead of beer but states to Jenelle that ‘wine’s still alcohol.’ 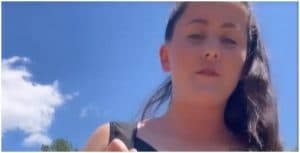 An agitated Evans begins making faces and waving her hands around with her response, “And your point is?” Evans continues her rant stating she was born in 1991. She then tells followers to ‘do the math.’

“I’m 29 years old. I can drink. If I want to switch to wine from beer, I’m gonna switch. I don’t care if y’all know because I don’t have an alcohol problem. That’s why I don’t care. So for you to constantly bring this up, I don’t know your point.”  Finally, Jenelle tells these fans that she doesn’t “really give two f**ks” what they think about how much she does or does not drink. 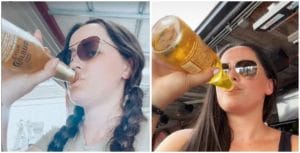 If Jenelle thinks her rant is going to put a stop to her follower’s comments on her drinking, she needs to rethink that position. The rant only sent commenters into overtime.

“That’s a whole lot of anger for someone who ‘doesn’t give two f**ks,'” posts one follower. Another said: “If you didn’t care, you wouldn’t take the time to post replies to everyone 🙄”

The mother of three replied: “Y’all act like you know when I eat, when I drink, when I sleep, when I take a s**t. Y’all should really just enjoy life, relax a little bit, have a drink.” 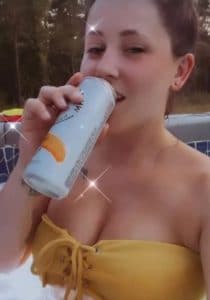 Jenelle Evans’ drinking is a major topic for the former reality star’s social media followers who began noticing just how much the young mother appears to drink these days. Evans claims she suffers from many serious medical issues that cause her pain and discomfort, making it nearly impossible to work. However, fans feel that if Jenelle is as sickly as she makes out to be, drinking will aggravate her illness.

Not to mention that if she is so sick, she is likely on medications. So they feel mixing alcohol and medication could result in a dangerous situation for Jenelle Evans in many ways.

Do you believe Jenelle Evans is right to slam her fans on this? Or is it a clear case of “The lady doth protest too much, methinks?”