There is a lot of questions being asked surrounding a recent RHOD scandal that has fans up in arms.

Trouble began brewing for the Dallas franchise during the most recent season. Tensions grew among the wives when fans began calling out Kameron Westcott. Kameron and her husband Court allegedly made racially insensitive remarks. RHOD housewife Tiffany Moon began accusing Kameron of associating her with a Thai hooker.

The two costars began engaging in a Twitter war. Tiffany responded to Kameron writing, “You came to attack and gaslight me. Don’t ever compare me to a “Thai sex worker” or call me bossy either, please.”

Kameron’s husband Court began stepping into the argument stating in a now-deleted tweet. Court writes, “‘Anti-racism’ is racism. It discriminates by the color of one’s skin. They tried that once in Germany it did not work out well.”

The racism scandal began taking gruesome turns. However, the network soon chose up aside and began supporting Tiffany.  The network felt an urgent need to release a statement reading: “Bravo strongly supports the Asian American and Pacific Islander (AAPI) community.

“Anti-Racism is, in fact, not a form of racism and the network stands by Dr. Tiffany Moon and her advocacy against racism and violence.”

Fans became very unhappy with the controversial debate among the wives and began requesting that Bravo fire Kameron for her “racist attack.” 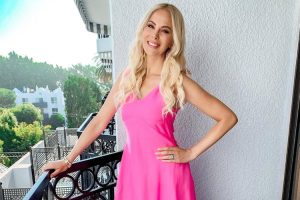 Kameron Westcott reacted to the news via Instagram, writing, “It is a sad day to see this chapter of The Real Housewives of Dallas close but also a wonderful day to sit back and remember all the amazing moments we had together as a group! These ladies have become sisters to me over the past 4 years and we’ve gone through so much together.”

The current incident is not the first racism issue the RHOD cast members have faced. In 2020, the public also began slamming Brandi Redmond after a 2017 video revealed her mocking Asian people.

“They ask me what Asian I am because my eyes, they squinty,” she said in the clip.

Social media users began brutally attacking Redmond accusing her of racism. Finally, Redmond issued a public apology stating: “A video resurfaced of me from three years ago which at the time I had posted and quickly deleted and then immediately apologized for my insensitivity.

“I would like to once again sincerely apologize for my offensive actions.”

The public backlash took its toll on Brandi Redmond mentally. She later reveals she sought professional treatment to help her fight off suicidal thoughts. At this time, Bravo reveals that RHOD will not be returning in 2022. However, a Bravo insider reveals the series could return in another medium.

Bravo has canceled The Real Housewives of Dallas. The shocking news hit the news leaving fans questioning the network’s decision to ditch the franchise.

The network spokesperson tells Page Six ” There are currently no plans to bring The Real Housewives of Dallas back next year. Beyond that nothing official has been decided.”