Kailyn Lowry reveals she is unhappy about some recent developments allegedly taking place at Teen Mom 2. It seems that Kailyn’s head may be getting a bit too big for reality television these days. Sure Kail has been around the MTV Teen Mom franchise for several years now. However, she may find out that making demands and threats usually doesn’t go over very well.

The 29-year-old mom of four may want to rethink her attitude if she plans on staying involved with the popular franchise. Lowry is making a hefty paycheck these days. But she may want to think long, and hard before making any rash moves.

Kailyn Lowry is lashing out again at the show’s producers. According to The Hollywood Gossip, she is making threats and demands that could very well find her reacting without thinking.

What Is Kailyn Lowry Unhappy About?

Lowry’s quick temper and bad attitude are rearing their ugly head again. In addition, Kailyn now knows that her ex Chris Lopez will also be appearing in the upcoming season. So now she is letting everyone know just how she feels about this.

During a recent Instagram Q&A, Lowry fans ask how she feels about Chris signing on to Teen Mom? Not one to mince words, Lowry quickly responds.

“I don’t give one single f–k what Chris does,” she replies in an annoyed tone.

The Teen Mom alum doesn’t hold back from there. She goes on to explain that her issue is with her bosses. She is angry and feels they should first discuss her feelings on the matter before offering Lopez a deal. Kail goes on to state that the biggest reason for her anger is handling, of the situation. She also adds that she feels the producers are treating her with a complete lack of respect.

“How I found out, and the lack of respect people have for me after 12 years of doing this show,” she said. 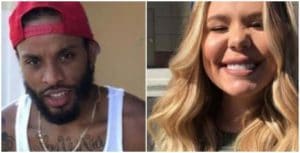 She claims she deserves respect. Is she saying that MTV should be running things by her first? What an interesting turn of events. Fans know from experience that Lowry calls it as she sees it.

However, does Kailyn believe that her role is so important that she can make demands or threaten to leave if she does not get her way? Seemingly so. Kail is not the first cast member to believe she is the one carrying the series. However, this is also not the first time she has stooped to making idle threats of quitting when things are not going her way.

For sure, fans feel that a conversation first is ideal considering Lowry and Lopez’s controversial past. But, Kailyn may want to step back and realize that she is only an employee in the big picture.

Threats, demands, and an entitled attitude does not go over well with the boss. Just ask Jenelle Evans and Farrah Abraham.

Both former Teen Mom cast members also both believe they are the ones who made the series what it is today. But, unfortunately for them, they are also both are no longer working at Teen Mom.

One thing is accurate; however, the ratings for the TM2 series are plummeting these days. Words of advice, though, Kailyn Lowry, choose your words and actions carefully because a new Teen Mom is waiting around every corner.

On the bright side, Kailyn Lowry often complains Chris Lopez is a deadbeat dad who doesn’t help her financially. Now that he has a job, he will no longer have excuses.