Kailyn Lowry is sharing her response to all of the rumors circulating concerning her dating status. Teen Mom 2 fans are dying to know the answer to whether or not Kailyn Lowry and her ex-husband Javi Marroquin are dating? There is a lot of speculation concerning these two.

So, is Kail and Javi dating? According to The Sun, Kail claims fans see her and Javi together again because they recently went into business together.

As far as dating…Kailyn Lowry’s response is a big NO! No, they are not dating, and no, they are not back together. Lowry claims she and Marroquin are finally in a good place and co-parenting and working together. She adds that things are so good, and she has no plans to mess up their current relationship.

In July Kail, and Javi announced while wearing matching t-shirts that they are going into business together. The former husband and wife reveal they are launching a training camp under the name Lethal Speed. Lowry claims that the camp will allow you to experience the same things that she and Javi have with Lincoln.

Javi adds, “Kail and I decided to go into business together and show all of you how amazing @lethal_speedy really is. We’ll be holding camps throughout the United States. You will bring your child and get some work in! Follow @lethal_speedy and @kaillowry for all the updates that will be dropping ASAP so you don’t miss your spot.” 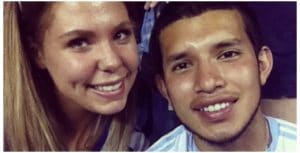 Fans Would Like To See Kail And Javi Together

Kailyn reveals she can understand why some might think she and Javi may be dating. However, the two claim they still share a very close bond and agree to get along for their son Lincoln.

Plenty of fuel added to the dating speculation late last month when Lowry publicly joined forces with Marroquin in a nasty feud against Lauren Comeau following an alleged physical encounter that reportedly went down between Javi and Lauren.

One follower comments, “Love to see you and Javi getting along.”

In which Kailyn replied: “Same! Hopefully, it stays this way.”

Kailyn Lowry and Javi Marroquin claim they are keeping things cordial and running smoothly for their son. At this time, things remain purely platonic. However, we all know when it comes to Kailyn Lowry, things could change in an instant. The more time they spend ‘getting along’ for Lincoln and investing their time in their new business venture, who knows what feelings could redevelop.

As Teen Mom 2 fans well know, a reunion with an ex is not out of the question when it comes to Kail. Unfortunately, for Lowry, history does seem to repeat itself, the good and the bad. For a lot of the fans, many believe Kailyn Lowry and Javi Marroquin getting back together wouldn’t be the worst thing for either one.