Teen Mom Og star Amber Portwood is keeping very busy this summer. However, the 30-year-old reality star is staying true to herself, making all positive changes in her life. Some of these changes include attending college full-time. Amber is also preparing for a complex custody case against ex-and son James’ dad Andrew Glennon.

But one of the most significant changes Portwood is making these days includes reconciling with her daughter Leah’s dad, Gary Shirley, and his wife, Kristina. Amber and the Shirley’s are resolving their previous issues. Teen Mom OG fans will remember that Amber and Gary became angry during an intense argument revolving around their daughter Leah and Gary’s wife Kristina during last season’s reunion.

Portwood left the reunion segment by storming off stage, telling Gary she hopes one day they could once again be friends; however, she never wants anything more to do with Gary’s wife, Kristina.

The family issue began when Leah and Amber began disagreeing over Leah’s 12th birthday party. An angry Amber took to Instagram after the episode aired, calling Kristina a “liar” and complaining that she spoils Leah. 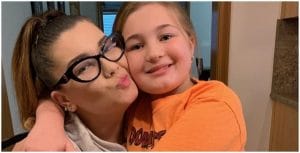 Amber recently spoke with The Sun, revealing that she, Gary, and Kristina are doing amazing.

“We literally just went to a fair, all of us together, the whole family.”

She continued saying, “So we are in a much better spot than we were. Everyone is doing good, and we are in contact. I see my kids, so obviously, I have to see them.”

Portwood explains that they see each other as much as possible, but, currently, their schedules pose a bit of a problem. Amber also reveals that she and Kristina are both presently attending school.

The feud became even uglier for the family after it was suggested that Amber was jealous of Kristina and her relationship with Leah. “I’m not jealous of Kristina, there is nothing about Kristina that even makes me jealous in any sense. I don’t try to be mean; I’m just telling the truth.” She continued: “[Leah] respects her because she brings her out to Starbucks, gets her nails done, and spends over a thousand something dollars of clothing on her.”

“Hell, I’d respect her too. I was raised to not spoil my child. Kristina doesn’t do anything for Leah. She doesn’t take care of my daughter.”

Months later, the co-parents seemingly have chosen to work out their differences. It makes things so much easier on the children involved. Hopefully, next, Amber Portwood will find a way to work out custody for her son James, 3, with Andrew Glennon.