Bold And The Beautiful fans learned that John “Finn” Finnegan (Tanner Novlan) is adopted. Now the burning question is who is his birth mother? There are numerous possibilities. However, the most obvious frontrunners are Quinn Fuller Forrester (Rena Sofer) and Sheila Carter a former Mrs. Forrester. (Kimberlin Brown).

Sheila was last seen on the CBS soap battling Quinn over Eric Forrester (John McCook). B&B spoilers tease Sheila may make a surprise return. Now that Eric is available she may want to reclaim him again He has always been the object of her obsession on daytime soap. But there may be another reason for her return. Could she be Finn’s bio mom? 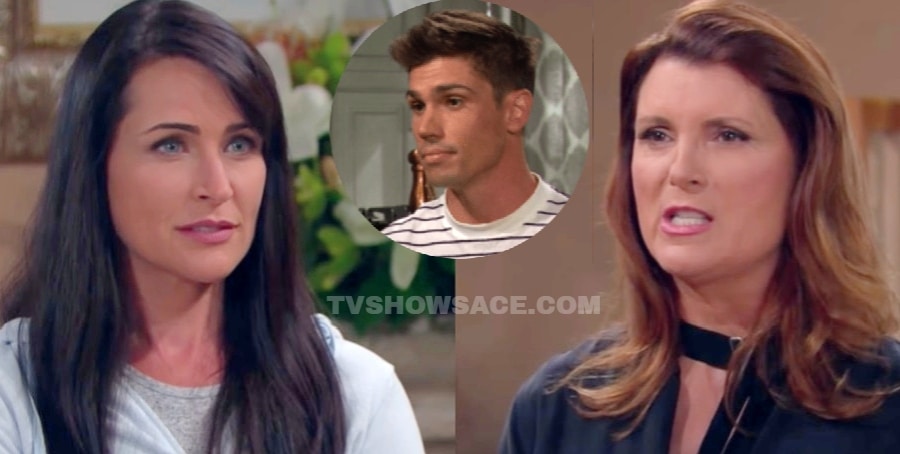 Kimberlin Brown Has Bold And The Beautiful Fans Buzzing

Bold And The Beautiful spoilers for the week of August 2nd to August 6th tease an uninvited guest will crash the wedding. This wedding crash will raise tensions. Also, this intruder has not been named but soap spoilers state it is a woman. Did Kimberlin give us a clue that it is her? And is she there for Finn’s wedding to Steffy Forrester ( Jacqueline MacInnes Wood)?

Kimberlin recently replied to a post on Twitter that has many fans convinced she is Finn’s bio mom. The post has a picture of Jack Finnegan (Ted King) looking secretive and stating there’s more to learn about Finn’s past. Kimberlin replied, “I can’t wait!”. Now some B&B fans are eagerly anticipating a connection to Finn. Is she giving us a clue or throwing us off track? 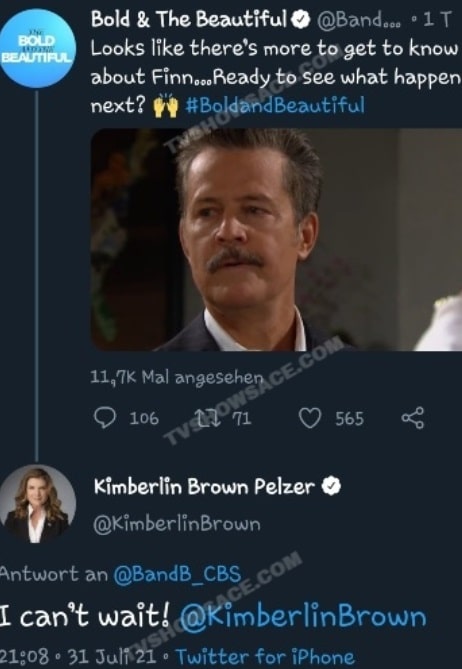 Finn’s Mom –  Was He Better Off Adopted On The Bold And The Beautiful?

There is no doubt that Finn is almost too good to be true.  Now it appears he may have a twisted woman for his birth mom. Whether it is Quinn or Shelia it is ironic. How could either of these loony women have given birth to a nice guy like Finn? Steffy may have struck gold in her future husband. However, with either Quinn or Sheila, she may end up with the mother-in-law from hell.

Although many Bold and the Beautiful fans are convinced psycho Sheila gave birth to Finn, others are not convinced. A growing number of fans are hoping that devious Quinn is the bio mom. Sheila being the mom would have great shock value. On the other hand, Quinn being the mom would have a great dramatic possibility and lots more screen time for Rena sofer. Either way, Finn’s life is about to change in a major way. 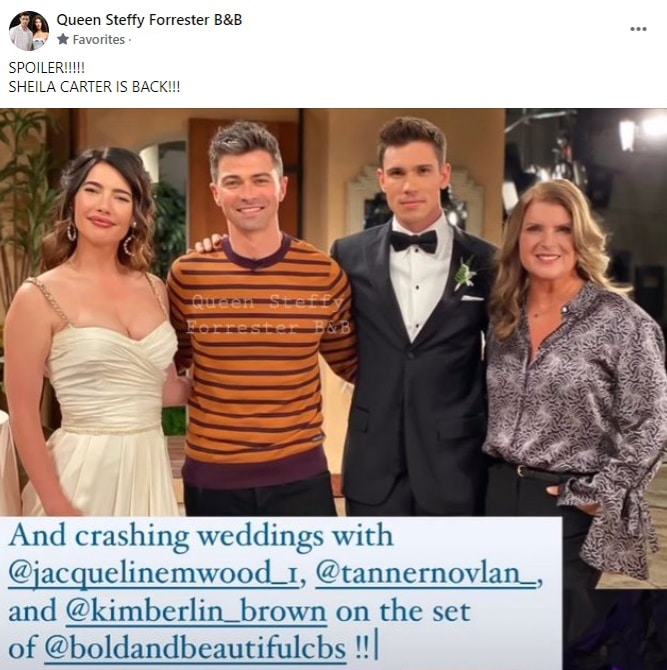 Who do you think gave Finn up for adoption? Is it the ex Mrs. Eric Forrester or his soon-to-be-ex Mrs. Forrester? What do you think fans is Kimberlin Brown trolling us or is she set to come back as mommy dearest? Let us know in the comments below.

The Bold And The Beautiful airs weekdays on CBS.