Kourtney Kardashian fans are reeling over the huge life changes that the KUWTK star has been making since she began dating Travis Barker. Not only has Kourt become very open to PDA when it comes to Travis, but she has also allowed him to cut off close to a foot of her hair!

Love does strange things to some people. However, fans feel Kourtney Kardashian is becoming an entirely different version of herself. Kardashian’s latest Instagram story reveals photos of Kourt’s former locks, according to The Sun reports.

Kourt captioned the photo of her hair, “Haircuts by @travisbarker”.

Kardashian fans remain torn over how they feel about Kourtney’s new love. Over the past several months, fans have witnessed Kourtney making so many changes that they think are out of character from the Kourtney they have grown to know over the years. The hair transformation is taking place amid many rumors surrounding Barker and Kardashian. These include the Las Vegas wedding rumors and, most recently, a pregnancy rumor.

Recently there has been a lot of talk among fans who have noticed Kourtney appears to have put on a few pounds. The Poosh founder also recently responded to the weight gain talk with a photo captioned “Why you could be gaining weight (and not because of food).”

She also added an article about PCOS (polycystic ovary syndrome.) This may be a hint that Kourtney Kardashian could be undergoing some health issues. However, many of her followers have taken notice that Travis Barker is always touching Kourt’s stomach. This action is something that often occurs when a couple may be expecting a new baby. 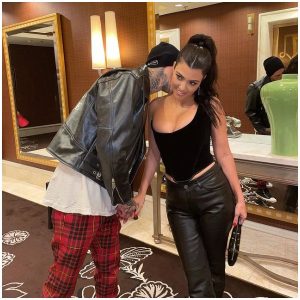 But, fans are aware they are dealing with the Kardashians, and the rest of the KarJenner clan is very well known for keeping secrets and teasing the public with false information. Here is what we know right now. First, Kourtney is head-over-heels for Travis Barker. Second, those closest to the couple claim they are not married…yet. However, wedding plans are allegedly in the works for later this year.

Is Kourtney Messing With Her Followers?

Next, Kourtney has always claimed she wanted six children. Kardashian shares three children, Mason, 11, Penelope, 8, and Reign, 6, with ex- Scott Disick. Barker also has two children with his ex, Alabama, 15, and Landon, 13. If Kourtney and Travis are expecting or become pregnant soon, that will push Kourt’s total to six, where she has claimed she wants to be.

Then again, maybe they won’t. It could be all the juicy information will be revealed when the Kardashians’ new Hulu show comes to light. Until then, fans will be keeping a close eye on Travis Barker and Kourtney Kardashian.

‘LPBW’ Huge Event Brings All Roloffs Together, What Was It?
Why ‘Jeopardy!’ Fans Have Such Major Beef With Mayim Bialik?
Anna Duggar’s Sister Rebekah Wants Her To Divorce Josh?
Khloe Kardashian Talks Tristan Cheating Scandal – ‘All of it is f–ked up’
‘Unexpected’: Fans Demand State Save Kylen From Jason?