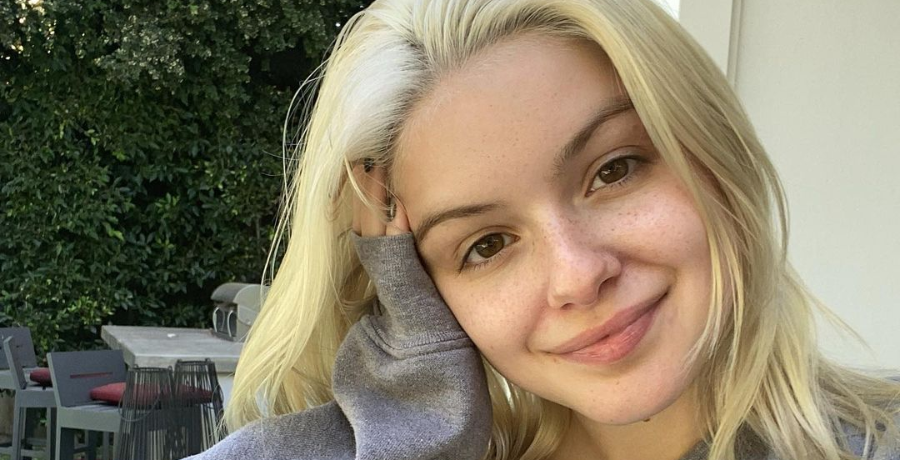 Ariel Winter is body confident these days and it shows. The 23-year-old put her cleavage on display in a new photo on Instagram. Ariel showed off her newly dyed platinum blonde hair and beautiful smile. She also had on an emerald green shirt that featured a plunging neckline.

The Modern Family star posted a series of photos on Instagram. In the first photo, Ariel Winter stunned in the dark green blouse and black jeans. She continued to stun in the last two photos, which were shot from what looks like a hotel room. The actress encouraged her 4.6 million fans to look for the following items sitting behind her.

“peep my mouth guard & antidepressants in these selfies I took before going to dinner and coming back to catch pokés @pokemongoapp, watch true crime shows and play @settlersofcatan alone with bots lollllll❤️‍🔥🎉 #vibes,” Ariel wrote in the caption.

Her fans didn’t even notice the objects in the back of her. Instead, they were too in awe over her beauty. One fan joked, “only hot people have anti-depressants tho queen so never forget it 💕” while another added, “I love your blonde hair god you’re so beautiful!! 😫💜”

Some noticed that the Kingdom Hearts: Melody of Memory star plays Pokemon Go. Some asked Ariel for her friend code, so they could play with her. Another fan wondered what’s wrong with having a mouthguard since she wears her every night. And then some advised her not to take antidepressants.

Needless to say, the comments section was a hot mess. However, most of the comments were genuinely positive. They couldn’t stop mentioning how “beautiful” and “flawless” Ariel looked. Some agreed that she looked like a little hottie.

The actress best known as Alex Dunphy, shared a shot of herself with an expression on her face as she sat around a crowd of people at what looks like a gala. The throwback photo showed her rocking platinum blonde hair and red lipstick. “Saw this candid of me and decided it needed to be meme’d,” Ariel wrote. “Make it good meme lords! Tag me ? Caption lords in the comments welcome too.”

Ariel’s fans rushed to her aid. Most of them took to the comments section to share their jokes. “The face you make when the girl you didn’t invite to your party… shows up to your party,” one wrote. “When they cast you as the nerd on modern family. (When clearly you’re the attractive one),” another added.

Check back with TV Shows Ace for more news on Ariel Winter.