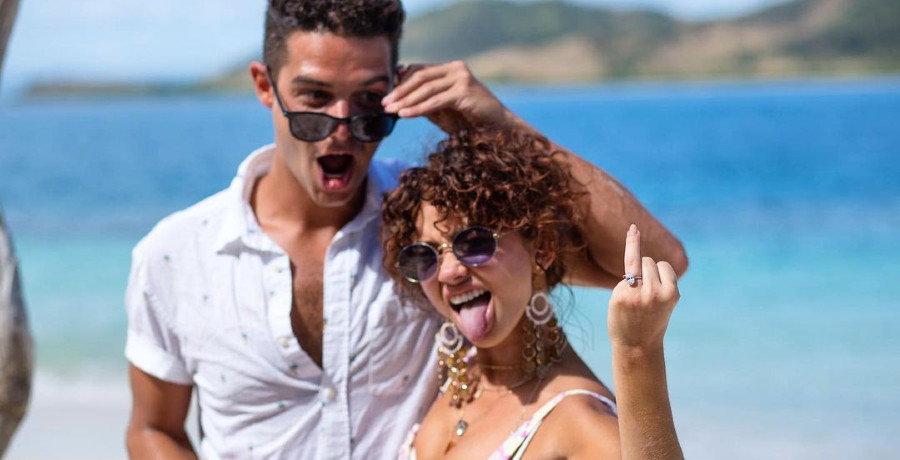 There may be a wedding this summer in Paradise, but not the Bachelor Nation contestants. A couple already engaged is rumored to be co-hosting the latest season of Bachelor In Paradise. We’re talking about actress Sarah Hyland and BiP bartender Wells Adams.

Wells Adams didn’t find love during his time on JoJo Fletcher’s season of The Bachelorette. Nor did he find love with Ashley Iaconetti on Season 3 of Bachelor in Paradise. He did return to Paradise for the next three seasons… as the show’s bartender.

In 2017, he started dating Modern Family actress Sarah Hyland. The two got engaged on a beach in 2019. Like many couples, their plans to tie the knot didn’t happen due to the coronavirus pandemic.

Despite the delay, she remained hopeful that they would have the wedding of their dreams. Wouldn’t it be fitting if they got married on a beach? Some fans think so.

Could the Celeb Couple Tie the Knot on the Beach in Paradise?

Will Wells Adams return to Bachelor in Paradise as bartender for Season 7? Cosmopolitan speculated last month that Wells Adams might step in as host amid Chris Harrison taking a break. New reports indicate that Harrison won’t be back for BiP. Instead, the network plans to rotate hosts, starting with David Spade.

Wells Adams is rumored to be among the guest-hosts, too. And he won’t be alone. Sarah Hyland is reportedly joining him. While fans have mixed reactions about comic David Spade’s turn as host, they are more welcoming of Wells Adams.

A few fans on social media suggested that Wells Adams and Sarah Hyland should marry while in Mexico. It seems like a perfect solution to their wedding planning issue. It’s even likely that ABC would foot the bill.

Do you think that Wells Adams and Sarah Hyland should take advantage of the timing and marry in Paradise? Share your thoughts in the comments down below.

The hosting news comes around the time that Bachelor in Paradise is rumored to start filming. However, ABC has not given any information about which Bachelor Nation alums will be competing on the new season.

Some mega fans are keeping an eye on the social media of former contestants they think might show up in Paradise. Many people suspect “Queen” Victoria Larson from Matt James’s season is a shoo-in for the drama-filled beach trip.

As fans know, Katie Thurston’s season of The Bachelorette kicks off on Monday, June 7. Could ABC have an announcement regarding BiP in store for fans? Check back with us for updates.