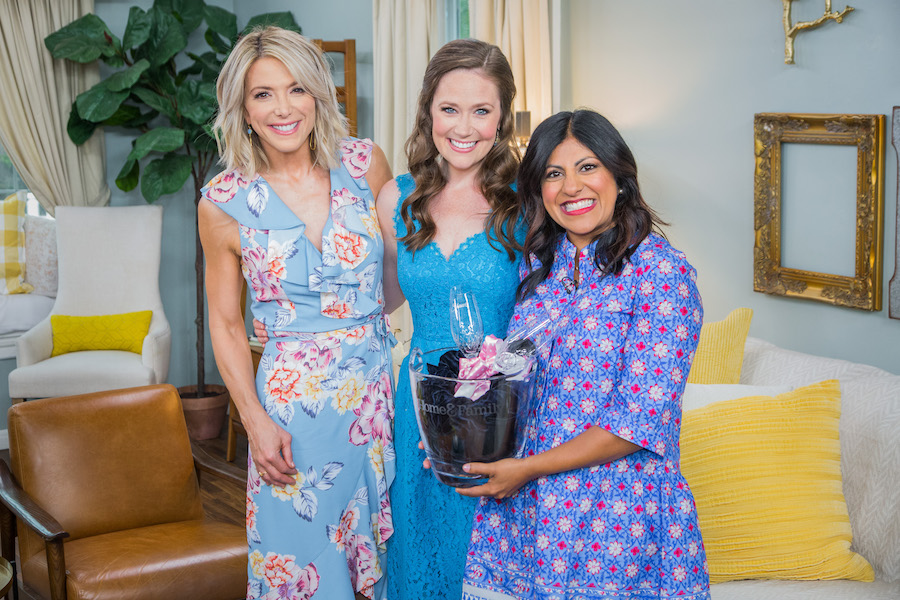 In the past six weeks, Hallmark fans have been watching a revolving door at their favorite feel-good network. There is a major shake-up going on. They have canceled Home & Family, Jesse Metcalfe left the show he was starring in, their exclusive podcast, The Bubbly Sesh, has not been renewed, and now Michelle Vicary, the executive vice president of programming for Crown Media Family Networks, is leaving.

In addition, fans have noticed that syndicated broadcast shows like The Golden Girls have taken over the network, as they only play a couple of original movies per day.

What is all the tea?

We will spill what we know.

On Monday, Deadline announced that Michelle Vicary is stepping down as the EVP of programming at Crown Media.  Who is she exactly? As the Deck The Hallmark guys so succinctly explained on Tuesday, she was essentially the “godfather” of Countdown to Christmas. She is the person behind the current programming.

Turns out, the new CEO of Crown Media Family Networks, Wonya Lucas, has been doing some major cost-cutting. This has led to layoffs and big changes. However, there has not been a real conversation with fans. Moreover, they are noticing the changes and are not happy.

What else has changed?

Another day, another shake up at @hallmarkchannel. First, Home & Family. Then, @thebubblysesh. Now, we say goodbye to @MichelleVicary. What’s next, no more Christmas movies?! 😂
Michelle, You’ve always been kind to us & we wish you all the best in whatever is next! pic.twitter.com/KJ58VtqOim

At the very end of March, Jesse Metcalfe left his Hallmark show, Chesapeake Shores. This was a total surprise to Chessies, who were excited for Season 5. The Desperate Housewives actor did some filming and a couple of weeks later, it was announced that Robert Buckley would be joining the cast.

There was no inside information on Metcalfe’s departure. However, it seemed rather odd that he would leave a show that was changed to accommodate his musical talent.

Perhaps fans should have become more suspicious when Hallmark’s Home & Family was canceled right after Jesse left. After Zooming it in during Covid, the restrictions were lifted and Debbie Matenopoulos and Cameron Mathison were headed back to the iconic house to film Season 9. Viewers were shocked, as this was the perfect vehicle to advertise and deep dive into the network’s original programs.

However, there has been one positive that has come out of this cancellation. Cameron is now reunited with Alison Sweeney to film a new Murder She Baked, called the Cream Puff Murder Mystery.

As they say, all good things must come to an end. Thank you to all of you who have faithfully listened. We appreciate you so much. Pls do follow us @JacklynCTweets & @shawlinivmh for the latest updates. Full statement below. #Hallmarkies #Hearties #Goodies pic.twitter.com/VYk62udmaz

He is also returning to his soap roots by joining the ABC soap General Hospital.

Last weekend, Seshers got the horrible news on Twitter. Unfortunately, they will not be hearing The Bubbly Sesh hosts talk about the latest Hallmark shows. Hallmark did not renew the contract. Their last show will be after they recap the final episode of Good Witch Season 7.

Jacks and Shawl are both actors. The two friends brought a lot of insights into some of the acting choices made in every movie or series episode they discussed. Both women had unbridled passion and enthusiasm for the Hallmark material. Listeners will miss them.

Viewers have noticed another major change at Hallmark. The network has increased the amount of inexpensive syndicated programming and reduced the amount of original content that they air. That means that instead of an older Lacey Chabert movie, the network is airing another episode of The Golden Girls.

In one Facebook group, a fan wrote, “Please bring the weekday movies we pay good money for Hallmark.” One fan commented, “Yes If they want to play reruns of something then play reruns of Hallmark movies not sitcoms. I’m sure none of us would mind. I’m sure they may be some older ones that may not have been seen by some of us so they would be new to us. Nothing new about same ole 30 yr old sitcoms.”

Why is Hallmark alienating their fans like this? Perhaps this is a cost-cutting measure that will surely save the network millions of dollars. However the question remains, will they lose viewership along with this change?

What changes have you noticed at Hallmark?