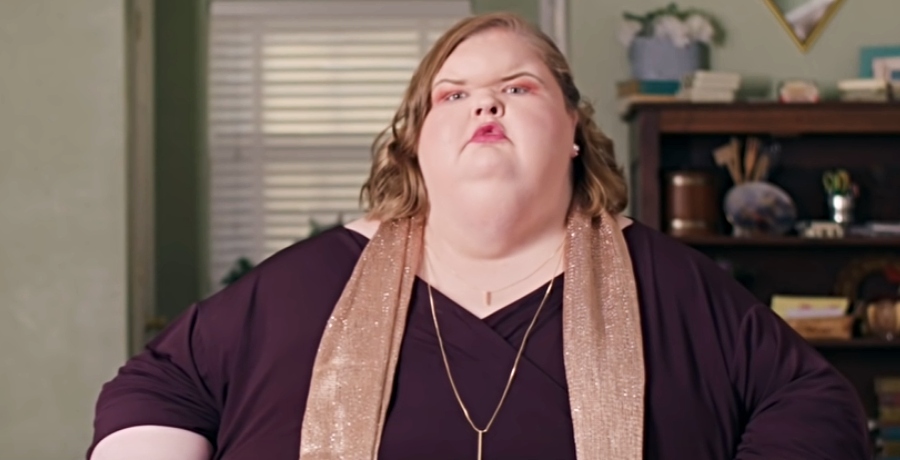 Tammy Slaton’s recent weight loss has attracted the attention of Instagram. According to 1000-Lb. Sisters fans, the TLC personality has dropped some serious pounds. Some of her Instagram followers note there are certain “beautiful facial features” they couldn’t really see before. Are things finally turning around for Tammy Slaton? Could we see her get weight loss surgery during 1000-Lb Sisters Season 3?

1000-Lb. Sisters Season 2 left fans unsure of what to expect

Season 2 of 1000-Lb. Sisters left fans fearing the worst for Tammy. When the episode came to an end, fans learned Tammy made the decision to go to an assisted living facility of some sort to get help with her weight loss. There, however, was a bit of a delay in the next step.

First, the family had to find a facility capable of housing her. Now, there were rumors she was placed in a facility for a brief time. These rumors claim the facility kicked her out. She allegedly had a relationship with one of the security guards. She also allegedly hit one of the nurses. There was a woman claiming to have a direct connection to the facility Tammy was staying at making these claims in fan groups on Facebook.

Tammy Slaton, however, cleared the air via social media. As those who follower her know, she’s extremely active on both Instagram and TikTok. She explained she would never hit someone — unless they were family. While some didn’t really care for that joke. Others assume it was just meant to be funny because of her alleged ongoing feud with her sister Amy Halterman.

Now, we don’t have a premiere date for 1000-Lb. Sisters Season 3 just yet… But, we do know they are currently filming for the new season. This is information both Amy and Chris have slipped on various social media platforms.

So, we can only speculate this means Tammy Slaton will experience weight loss during Season 3 of 1000-Lb. Sisters.

Tammy Slaton’s weight loss evident: See before and after photos

Now, Tammy Slaton’s followers have been here for all of her recent selfies on Instagram. Why? Well, mostly because her weight loss has been evident. In fact, her followers even noticed the fat socket on her forehead had decreased in size. This change to her face really opened her face up more. And, it allowed fans to see her “beautiful eyes.”

Here’s a before and after collage of Tamy Slaton’s weight loss progress featuring one of her recent selfies:

As you can see from the before and after collage above, Tammy Slaton still has a lot of work to do. But, she’s lost a significant amount of weight. And, her facial features are slowly becoming defined! Fans hope she’ll keep up whatever she’s currently doing that’s working for her.

Unfortunately, we don’t have exact numbers regarding her recent weight loss. Moreover, this is information that will likely be reserved for 1000-Lb. Sisters Season 3. But, fans are definitely happy to see she’s finally making some real progress.

1000-Lb. Sisters fans also can’t help but notice how incredible Tammy Slaton is looking these days. She’s looking much happier and healthier. She recently got her hair done. Moreover, she also declared she was “in love” on social media recently. Now, before you panic… This isn’t another Jerry Sykes situation. Tammy Slaton is finally “in love” with herself.

This is a huge step in the right direction for Tammy as loving herself is an important part of losing weight and finding someone to really be with. Most fans hope she’ll focus on losing weight and worry about dating somewhere down the line.

So, do you think Tammy Slaton has lost some weight? Do you see the same facial features Instagram now sees? Share your thoughts with us. And, stick with us for the latest 1000-Lb. Sisters news.