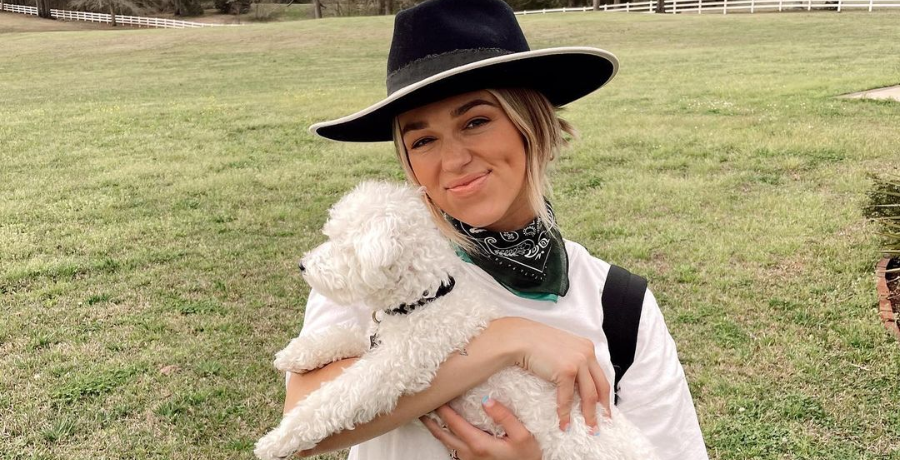 Duck Dynasty Sadie Robertson loves being pregnant. There hasn’t been a day when she hasn’t smiled. On Monday, March 28, Sadie shared a photo of her baby bump at 35 weeks. She revealed in the caption how wonderful it is to be pregnant.

In the new photo posted to her Instagram feed, Sadie placed her hand on her baby bump. She wore a black denim jacket over a little black dress. The trendy star accessorized her look with a brown Louis Vuitton handbag and white tennis shoes. Also, she gave the duck lip expression to the camera.

This photo comes as Sadie Robertson expressed her gratitude for her body’s ability to change and carry her baby girl. She added that she’s “thankful God made our bodies to do the things they can do.” The 23-year-old says that “it blows my mind that nearly 9 months ago I had a baby the size of a poppy seed and now that little girl is kicking me with her long legs, nestled in my rib cage and responding to my voice.”

In October 2020, Sadie announced that she’s expecting her first child with her husband, Christian Huff. The two posed together as they showed their sonogram photos. At the time, the A&E stars said they were “screaming with excitement” when they first discover the news. Earlier this year, Sadie revealed that she first discovered she was pregnant in a dream that she had.

Since announcing the baby news, Sadie has been sharing updates on her pregnancy. On February 8, she commemorated the start of her third trimester by posting a series of photos of herself and her husband. In late February, she had the first of her two baby showers. Now, it looks like Sadie is making a return to reality TV.

Duck Dynasty fans are excited after seeing Uncle Si on Sadie Robertson’s Instagram page. She posted a photo that included her dad Willie Robertson, her husband Christian Huff, and fan-favorite Uncle Si. In the Instagram post, Sadie announced that she will be interviewing her uncle on her podcast, “Whoa! That’s Good.”

Since Duck Dynasty premiered in 2012, Uncle Si became a fan favorite. Now, it looks like the Robertsons are making their return to reality TV. On Friday, April 2, Sadie shared a series of clips from the new Facebook Watch series titled At Home with The Robertsons, which will premiere on Monday, April 5 with new episodes every Monday and Thursday.

According to Willie’s Facebook page, the show will follow Willie and Korie as they “invite celebrity guests into their Louisiana home for a day of southern hospitality, compelling and honest conversations, and fun-filled outdoor adventures, all served with a dose of Robertson-style humor.”

The trailer includes appearances from former Bachelorette Hannah Brown, Tim Tebow, and Sadie Robertson herself. The Robertson family wants to prove there is more to them than duck hunting. They also have an intense conversation about race with South African model Demi-Leigh Nel-Peters.

What are your thoughts on Sadie’s new show? Sound off below in the comments.