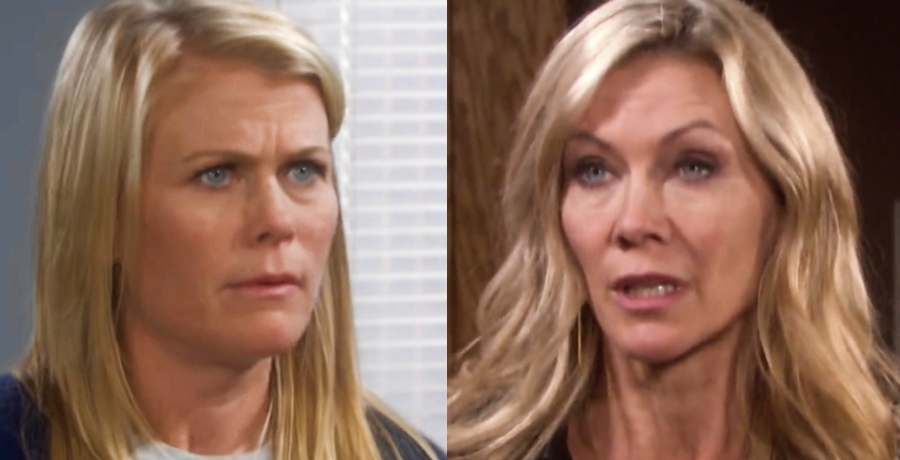 Days of Our Lives spoilers reveal Kristen DiMera (Stacy Haiduk) will do whatever it takes to keep up her charade as Susan Banks. This way, she can keep tabs on Chloe Lane (Nadia Bjorlin), whom she sees as a threat to her relationship with Brady Black (Eric Martsolf).

New DOOL spoilers say Kristen resorts to blackmailing her sister-in-law Sami Brady (Alison Sweeney) and Lucas Horton. It seems those two know something Kristen wants to be kept secret, and she’s got the goods on them to make sure they do on the NBC soap.

Days of Our Lives Spoilers: Sami Brady Confides In Lucas Horton About Her Marriage To EJ DiMera

Days of Our Lives spoilers inform Sami Brady finally has a heart-to-heart talk with Lucas Horton about her marriage to EJ DiMera (Last Played by James Scott). Lucas and Sami certainly have a solid friendship. They truly bring out the best and the worst in each other. Lucas is always there when Sami or their two kids need him. Their relationship spans decades, so of course, Sami feels comfortable being vulnerable around Lucas.

Days of Our Lives spoilers predict Sami tells Lucas her marriage to EJ is in trouble. After all those years searching for him and now nursing him back to health, it’s taken a toll on their relationship. Of course, Lucas will be in Sami’s corner. These two always seem to find themselves drawn to each other. In fact, their closeness likely leads to a threat from someone close to EJ.

DOOL Spoilers: Kristen DiMera Caught But She’s Got The Upperhand

According to Days of Our Lives spoilers, Sami and Lucas stumble across Kristen disguised as Susan Banks. Of course, Sami immediately wants to tell her stepbrother Brady Black what his girlfriend’s been up to. Kristen is known for getting sloppy and making a mess of her schemes. This is just another case of that bad Kristen karma. However, she always figures out a way to get out of her jams. In many ways, she and Sami are very alike.

Days of Our Lives spoilers tease Kristen has “evidence” to suggest Sami and Lucas are more than friends and co-parents. In fact, Kristen likely has some incriminating photos of the two in a compromising situation. So Kristen pulls a standard play from the DiMera book of tricks and blackmails Sami and Lucas into silence. Certainly, Sami doesn’t want her husband (Kristen’s brother) to learn her secret.

Days of Our Lives: EJ DiMera Returns To Salem Soon

Days of Our Lives comings and goings confirm the role of EJ DiMera has been recast and is already on set filming. Although the actor’s identity stepping into James Scott’s shoes, who played EJ until his departure in 2014, has yet to be made official. It’s speculated to be Daniel Goddard, who played Cane Ashby on CBS’s The Young and the Restless.

EJ DiMera could be returning just in time to save his rocky marriage to Sami Brady. Additionally, newfound brother Jake DiMera’s (Brandon Barash) rein as CEO could be nearing an end if EJ wants to take over as the leader of the DiMera family and business on the NBC soap,