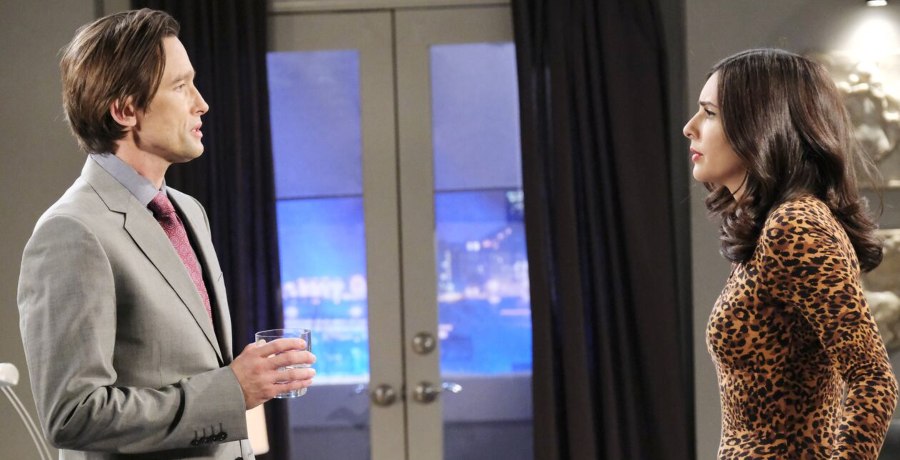 Days of Our Lives spoilers reveal Gabi Hernandez (Camila Banus) and Philip Kiriakis (Jay Kenneth Johnson) step out for a night on the town. This is the couple’s first time out together as a “couple.” Of course, there’s nothing simple about dinner and drinks in a town like Salem. Emotions run high, and fists fly when Gabi and Philip attempt to get to know each other better this week on the NBC soap.

Days of Our Lives spoilers say Gabi Hernandez agrees to have dinner with her new boss Philip Kiriakis. Now that Titan’s agreed to relaunch GabiChic, Philip and Gabi will certainly be spending more time together. Both Philip and Gabi are single, not by choice. Gabi wants Jake DiMera (Brandon Barash) back. At the same time, Philip is still carrying a torch for Chloe Lane (Nadia Bjorlin).

Days of Our Lives spoilers tease Gabi, and Philip’s faux romance could make their respective love interests jealous and hopefully draw them back in. Plus, there’s the extra added bonus of their romance driving Philip’s mother and Jake’s girlfriend, Kate Roberts (Lauren Koslow) insane. So with those ulterior motives in mind, the two set out for their first date at the Brady Pub.

Days of Our Lives spoilers know Xander Cook (Paul Telfer) is devastated after Sarah Horton (Linsey Godfrey) dumps him hours before their nuptials. Unbeknownst to Xander, “Sarah” really is Kristen DiMera (Stacy Haiduk) wearing a Sarah mask. Xander’s not taking the news well. So he heads to the Brady Pub to toss back a few drinks to numb the pain.

Days of Our Lives spoilers remind Xander Cook is not a fan of Philip Kiriakis. After all, it’s Philip’s fault that he’s not CEO of Titan. Even though Philip was reckless with laundering mob money through Titan, Philip’s still Victor Kiriakis’ (John Aniston) son. So when push came to shove, Victor chooses to give his son a second chance.

With liquid ambition running through his veins, Xander takes a few swings at Roman when Roman attempts to cut him off. DOOL spoilers suggest Gabi was taunting Xander and riled him up. When Xander gets angry and loud with Roman, spoilers say Philip ends up taking the punch. Of course, Roman bounces Xander from the pub.

Days of Our Lives: Kate Not Happy To See Gabi With Philip

Days of Our Lives spoilers know Kate Roberts is a bit jealous of Gabi Hernadez’s pull over her boyfriend, Jake. After seeing Gabi tend to Philip after Xander decks him, Kate is beside herself. She never dreamed her son and Gabi would be a thing, but now it appears to be happening. Jake DiMera is the voice of reason to Kate. He assures her it’s just Gabi using Philip to make him jealous, and clearly, it’s not working.

However, DOOL spoilers say it bothers Kate. So the end of Jake and Kate’s relationship might be soon coming on the NBC soap thanks to Gabi and Philip’s faux date.