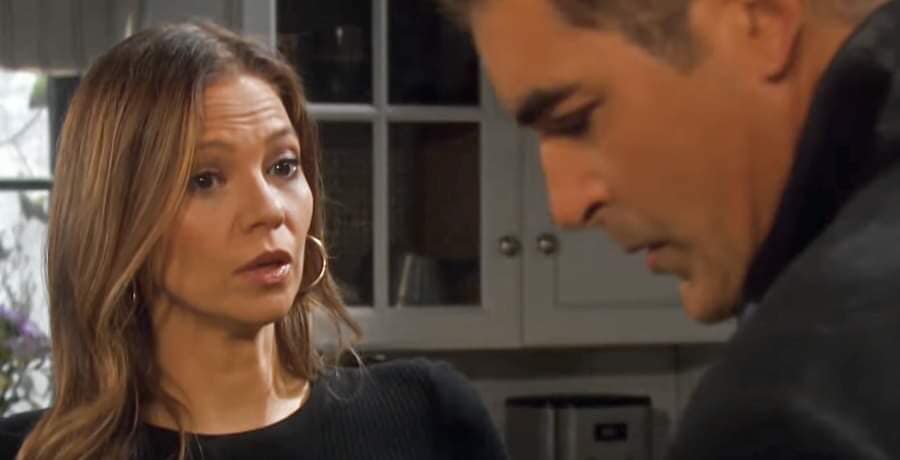 Days of Our Lives spoilers reveal Ava Vitali (Tamara Braun) has a big favor to ask of Rafe Hernandez (Galen Gering). The last big favor was allowing her to move into his home while her son Charlie Dale (Mike Manning) was on the loose.

However, that favor was asked of Rafe by Ava’s bestie Nicole Walker (Arianne Zucker). Now, Ava has an even bigger favor to ask of Salem’s top cop this week on the NBC soap.

Days of Our Lives Spoilers: Ava Vitali Makes Herself At Home At Rafe Hernandez’s House

Days of Our Lives spoilers show Ava Vitali certainly has made herself quite comfortable living at Rafe’s house. She’s acting more like a roommate than a house guest. This living arrangement was supposed to be temporary until the Charlie situation was squashed.

Since Charlie’s dead, there’s no reason why Ava cannot return to her own apartment, according to Gabi. Plus, Tripp is also living there with her. So it’s not like she will be alone.

Days of Our Lives spoilers confirm Ava’s presence at Rafe’s house wore on Rafe’s sister Gabi Hernandez’s (Camila Banus) last nerve. So much so that she moves out of her family home and back into the house she owns, the DiMera mansion.

Days of Our Lives spoilers know Gabi Herandez flung an accusation at Ava Vitali before she moved out. Gabi questioned why Ava was still living at her brother’s house. After all, Charlie is dead. So return to her own apartment and life.

Also, Gabi said something that unnerved the freeloading houseguest.  Gabi told Ava she saw her slip out the back door the night Charlie was murdered.

Gabi isn’t the only one who suspects Ava’s innocence. Days of Our Lives spoilers say Nicole Waker also is starting to think Ava offed her son. Certainly, Ava has motive and means. But did she kill her own kid? Both Nicole and Gabi are drawing that conclusion teases DOOL spoilers.

Days of Our Lives: Ava Asks Rafe To Make Their Situation More Permanent

Days of Our Lives spoilers show Ava Vitai needs to ask Rafe for another favor. The other day she revealed to her favorite son Tripp Dalton (Lucas Adams), that she was several months behind on her rent. So living at Rafe’s was a blessing for her as she would be homeless soon. The reason she’s behind is that she cut ties with her mob family and their money. So without a job or income, she is in bad shape financially.

Days of Our Lives spoilers say Ava asks Rafe for a big favor. There are a couple of possibilities as to what she has in mind. However, spoilers tease Ava’s looking to make her living situation with Rafe more permanent. So is Ava asking to live at Rafe’s indefinitely, or perhaps she’s planning to ask Rafe to marry her? If Nicole’s and Gabi’s suspicion are correct and Ava is Charlie’s killer, marrying Rafe would prevent him from testifying against her if she confesses to him on the NBC soap.