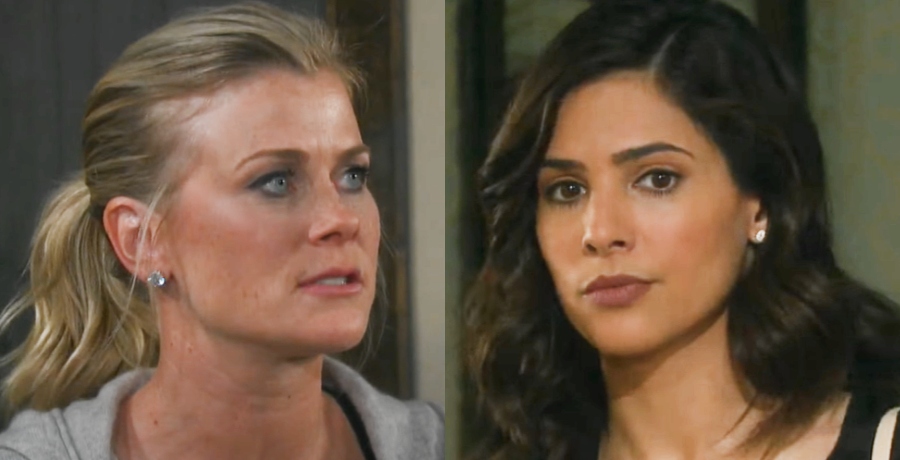 Days of Our Lives spoilers for the week of March 15 reveal Gabi Hernandez (Camila Banus) makes a big move. Plus, Sami Brady (Alison Sweeney) confesses, but to whom? Also, Ciara Brady (Victoria Konefal) is reunited with her family but lashes out to those who love her most on the NBC soap.

Days of Our Lives Spoilers: Sarah Horton Goes Missing On Her Wedding Day

Days of Our Lives spoilers confirm Sarah Horton (Linsey Godfrey ) and Xander Cook (Paul Telfer) are set to wed this week. However, Sarah Horton is likely to be a no-show. Sadly she figured out Kristen DiMera (Stacy Haiduk) was parading around Salem as Susan Banks. So, of course, now Kristen has to go all DiMera on Sarah.

Days of Our Lives spoilers show Xander Cook’s frantic when he realizes Sarah is missing. Xander waited a long time to make Sarah his wife. Now thanks to Kristen, he might have to wait a little longer –and also find his missing bride.

DOOL Spoilers: Ben And Ciara’s Reunion Is Not As Ben Anticipated

Days of Our Lives spoilers show Ben Weston rescues his wife, Ciara Brady, from the explosion where she was held behind glass for months. However, the reunion isn’t all Ben hoped it would be. Ciara Brady suffers a head injury in the explosion. So nows she’s reunited with her family and friends. However, she isn’t quite the same. Ciara has amnesia. So sadly, she doesn’t recall the great love she and Ben share.

Days of Our Lives spoilers suggest Ciara will think it’s a few years ago, and she’s in the hospital after crashing her motorcycle after catching her then-boyfriend (Tripp Dalton) in a compromising position with her niece/ bestie Claire Brady (Isabel Durant). Ciara also recalls Ben as the infamous necktie killer who murdered several people and attempted to off her own cousin Will Horton (Chandler Massey). Certainly, Ben’s devastated. Spoilers say he vows to work nonstop to get Ciara to remember their great love.

Other Days of Our Lives spoilers show Rex Brady (Kyle Lowder) back in Salem. He makes an appearance at Xander’s two-person stag party. Clearly, Rex is not a fan of  Xander’s and also still seems to be pinning away for his ex-fiance Sarah Horton.

Both Chloe and Brady encourage Rex to fight for Sarah. This as Xander is frantically looking for his runaway bride. Choe’s already laid out her concerns to Sarah. Will Brady’s disapproval of Xander sway Sarah?

In the latest #DAYS, Chloe advises Sarah not to marry Xander. https://t.co/ZsCmioRrzb pic.twitter.com/t6XSVvsSXN

Days of Our Lives Spoilers: Gabi Hermandez Moves Back Into The DiMera Mansion

Days of Our Lives spoilers say Gabi Hernandez moves back into the DiMera mansion. Of course, it is her house so why she didn’t just move there initially is baffling. However, spoilers say she and Rafe Hernandez’s (Galen Gering) houseguest Ava Vitali (Tamara Braun) have words. So Gabi decides it’s time to move back into her house, even if it’s also a lion’s den.

Days of Our Lives spoilers tease Jake DiMera (Brandon Barash) thinks Gabi’s move is to be close to him. Although it’s a side benefit, it isn’t her sole reason. Jake’s ego must be in overdrive. Certainly, Kate Roberts (Lauren Koslow) isn’t thrilled Gabi’s back in the mansion. And after Gabi sold out Abigal Deveraux’s  (Marci Miller) part in Gwen Rizczech’s (Emily O’Brien) kidnapping, Abby certainly isn’t happy to share a roof with Gabi either.

"Why don't you just tell us what happened. You killed Charlie Dale, didn't you?" #Days #Shelle #Lumi pic.twitter.com/e1pKl0iBDt

Additional Days of Our Lives spoilers show Rafe Hernandez has a second suspect in Charlie Dale’s (Mike Manning) murder, So Sami is released on bail and told not to leave the jurisdiction. Once released, she catches up with her ex-husband Lucas Horton (Bryan Datillo). Then she drops a bombshell on him, say DOOL spoilers.

Sami Brady confesses to one of the few people she trusts, Lucas Horton. Certainly, she won’t be making this confession to the Salem PD. Spoilers indicate Sami tells Lucas she believes their daughter, Allie Horton (Lindsay Arnold), shot her rapist. So Sami’s just being a good mom and taking the wrap for her daughter. However, future spoilers tease Lucas will confess to the police that he gunned down Charlie Dale. This way, he’s able to protect both Sami and Allie. But Lucas isn’t the shooter, and the real murderer is still on the loose on the NBC soap.