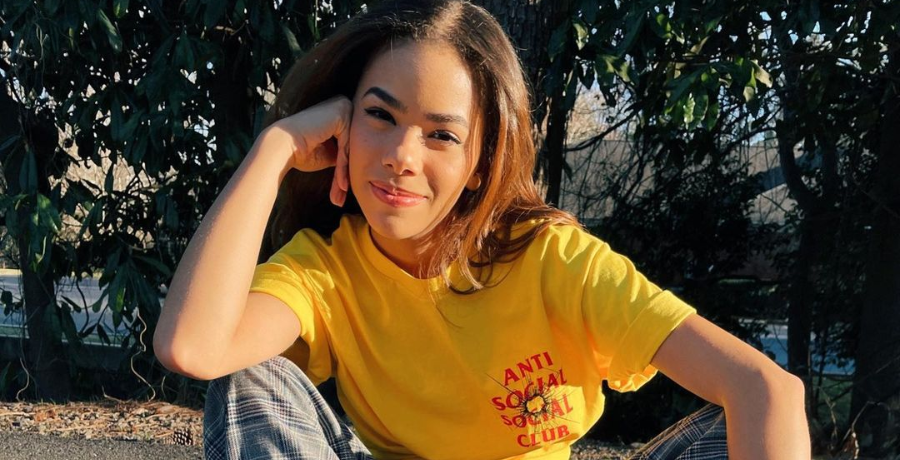 Ginny & Georgia star Antonia Gentry spoke out after the Taylor Swift controversy. The young actress plays Ginny Miller on the Netflix series. She took to social media to thank fans for their overwhelming support. On Monday, March 1, Swift called out the show for their “deeply sexist joke.”

While the joke was made in an episode that appeared last month, Swift didn’t think it was a great way to start Women’s History Month. She wrote a damning tweet that received a half-million likes. Since Swift posted the statement, her fanbase slammed the cast and crew on social media. As for Gentry, she thankfully received much support.

On Thursday, March 4, the 23-year-old posted a lengthy statement on Instagram. She thanked fans for their “voices and inspiration” in the days after Swift’s tweet. Gentry and many others received backlash after the singer called out Ginny & Georgia. While Gentry didn’t directly address the Swift backlash, this comes after the singer expressed her disappointment in Netflix and those affiliated with the show.

“Thank you for the love and support you have shown me and our show, ‘Ginny and Georgia,’ over the last week,” Gentry wrote on Instagram. “I never would have imagined something like this as a young girl – that is, having a voice capable of impact.”

The actress said it was “meaningful” to receive “hundreds of messages” from fans on social media. Most of those fans said they felt “seen, heard and understood because of the show and its characters.” Clearly, the support touched Gentry, which is why she addressed it. She also received messages from fans who simply found the show entertaining.

Gentry continued to write that “as someone who grew up feeling voiceless and unimportant, and who did not see herself reflected on screen, Ginny Miller was finally a reprieve.” She’s proud to play “a character who was just as confused and imperfect as I was.” Gentry also reminded people that Ginny Miller is a fictional character “who reflects all of life’s contradictions and imperfections.”

This is important to note as Swifties continue to harass and dox Gentry and the writer and producer at Condé Nast Carrie Courogen. Gentry ended her message by thanking “all the people who have sent hundreds of messages about feeling seen for the first time” and for their “voices and inspiration.”

On Monday, Taylor Swift shared a statement on Twitter. She slammed Ginny & Georgia for making a joke at her expense. The line, “What do you care? You go through men faster than Taylor Swift,” was said by Gentry’s character Ginny to her mom, Georgia (Brianne Howey).

“Hey Ginny & Georgia, 2010 called it and it wants its lazy, deeply sexist joke back,” Swift tweeted. “How about we stop degrading hard-working women by defining this horses*** as FuNnY.”

Swift also slammed Netflix. Both her Reputation Tour Documentary, as well as her political documentary Miss Americana, are on the streaming platform. The “Willow” singer concluded her statement by adding, “Happy Women’s History Month I guess.”

Ginny Miller is not a real character

That’s what Jezebel contributor Ashley Reese reminded Swifties. Ginny & Georgia has angered them so much that they attacked Gentry on social media. They felt that the best way to defend their favorite pop star was to harass her on Instagram. Most of Gentry’s Instagram posts are filled with comments that read “RESPECT TAYLOR SWIFT.”

The Atlanta native didn’t write the joke. Also, attacking Gentry in the name of feminism loses the point of Swift’s statement. Ginny Miller is a fictional 15-year-old character who is not of this world. Swift’s fans have forgotten that Gentry plays a character who has flaws and may not always say the right things.

It’s a breath of fresh air from some characters who come off too “woke” on Netflix shows. As for Swift, she hasn’t said more since that tweet. In the meantime, Gentry is grateful for the support she has since received. She is going to need it with the ever-increasing backlash from Swift’s fanbase.