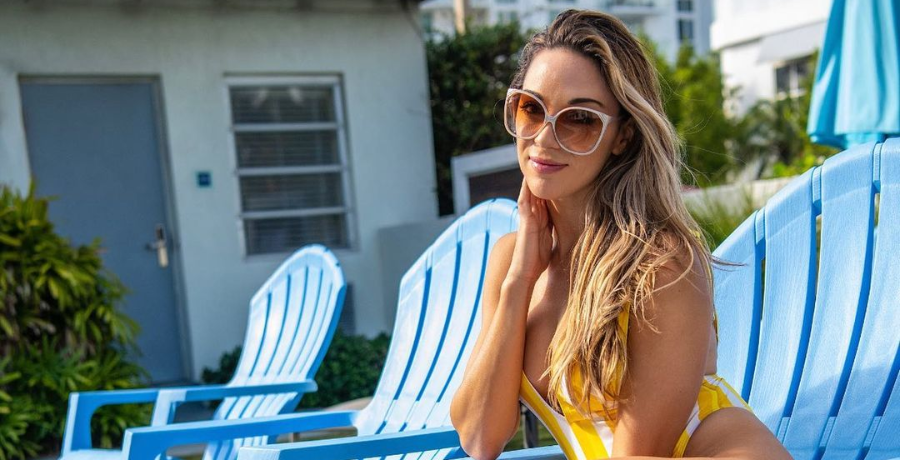 The Below Deck Season 8 reunion took place on Watch What Happens Live with Andy Cohen on Monday night. Most of the crew members reunited virtually. Former deckhand Rob Phillips, who appeared in the second half of the season, couldn’t make it. Host Andy Cohen said he was currently “digging for gold.”

But, it was Elizabeth Frankini who stole the show. The second stew wore an interesting look during the reunion. Throughout most of the night, fans reacted to Elizabeth’s ensemble. She paired the look with a full-face of makeup and a swipe of bold lipstick.

Most Below Deck fans took to Twitter to share their thoughts. Reactions were mixed. But an overwhelming amount of viewers thought she looked like an Olympic figure skater. They didn’t think her look translated well in the Zoom chat. Here are just some of the many comments:

Meanwhile, other fans think she looked like a certain figure skater. One fan asked: “Anyone else watching #BelowDeck reunion thinking Elizabeth looks like an extra from I, Tonya?” A second user wrote: “Why is Elizabeth dressed like Tonya Harding?”

Other Below Deck fans thought Elizabeth looked like a superhero. One fan compared her to the likes of Wonder Woman. Another compared her to a “superhero that figure skates.” Even some got major Marvel vibes from her outfit.

Elizabeth took to Instagram to share her look. It was not a figure skating costume, but a rainbow gown. The Below Deck star saw it as a positive nod to the end of a dramatic season. “May every storm in your life be followed by a rainbow,” Elizabeth wrote in the caption alongside photos of her dress.

She previously teased her look earlier this month. On Thursday, February 11, the carefree soul shared a selfie of herself in her reunion look. In the caption, Elizabeth credited Girlfriends Boutique and makeup artist Yolie for “glamming” her up for the “special occasion.” She also called her gown a “rainbow look and aura.” During the reunion, another “distraction” was James Hough’s dogs in the background. The British deckhand owns three dogs, as seen on his Instagram account. Most fans were in awe of his dogs. They thought his pooches were cuter than he was.

While all of the women dolled up for the show, fans noticed that James didn’t put any effort into his look. He opted for an aqua-colored “Flex” shirt. Even former deckhand Shane Coopersmith showed up in a yellow T-shirt at the beginning of the event. Both men didn’t understand the purpose of the reunion and thought it was a comedy roast.

What did you think of Elizabeth’s reunion dress? Sound off below in the comments.