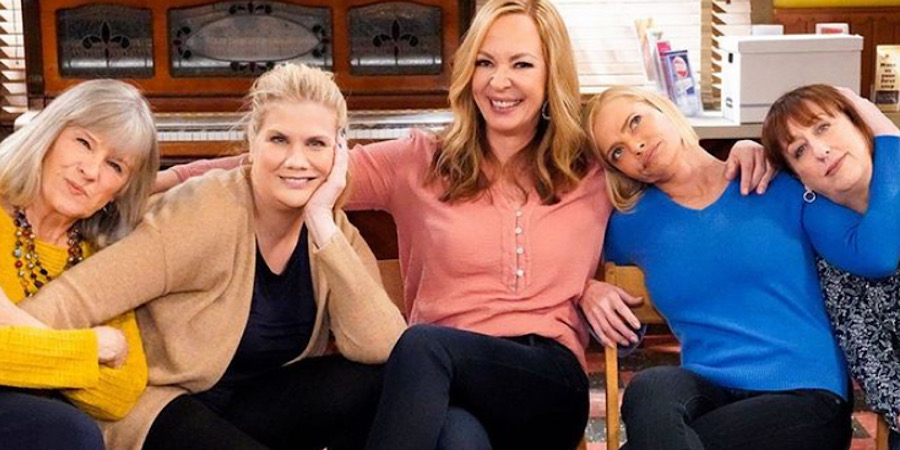 CBS’ Mom will officially end at the end of this season. Allison Janney just told Ellen DeGeneres she would happily keep telling these characters stories as long as possible. Sadly, Season 8 is the end of the road for one of the most beloved ensembles on television.

Mom– The Way They Were

When Mom came on the air in 2013, it revolved around recovering alcoholic, Christy Plunkett. Estranged from her mother, Bonnie, the two reconnect at an AA meeting and soon begin living together. They navigated raising Christy’s two children, an eviction, death, relapse, and so much more. Together, they also managed to create their own close family with a group of ladies from their meeting: Wendy, Jill, and sponsor, Marjorie.

As time went by, Christy was in college while Bonnie fell in love with Adam. Unfortunately, Christy’s gambling addiction resurfaced and she was forced to confront this demon. At the same time, she also got into law school, her long-time dream. While pursuing law school and repaying her gambling debts, a friend from Bonnie’s past joined the group. Tammy was in foster care with Bonnie but ended up going down a bad road and ended up in prison. Bonnie took her under her wing and soon became a welcomed member of the group.

As for the cast, Allison Janney (Bonnie) and Anna Faris (Christy) had signed two-year contracts to take them through Season 8. Then, prior to Season 8, Faris revealed she would not be returning. Instead of killing her off, the writers sent her to a prominent law school and the show went on.

Saying Goodbye to the Series

Today, it was announced the series would end after eight seasons. It’s a top performer for CBS and the whole network is proud of what the show has accomplished, according to Entertainment Tonight. “Since its premiere, Mom has touched people’s lives by sensitively tackling weighty yet relatable topics, with a perfect, deft touch. Mom redefined what a comedy can be, and we are proud to have been the network home to this wonderful series,” said Kelly Kahl, President of CBS Entertainment.

Kristen Johnston, who plays Tammy Diffendorf, took to Twitter to share her sadness. She noted what a “joy” and “honor” it had been to be on the show. Johnston also shouted out the amazing fans the show has. The current season has explored Jill’s breakup with cop Andy and getting to know the women without Christy. It has been nominated for three Critic’s Choice Awards, one for Jaime Pressly (Jill) and one for Outstanding Comedy Series.

Mom currently airs Thursday nights at 9 pm only on CBS. The series finale is set to air on May 6th. No word how it will end. Are you sad about the end? Let us know in the comments.