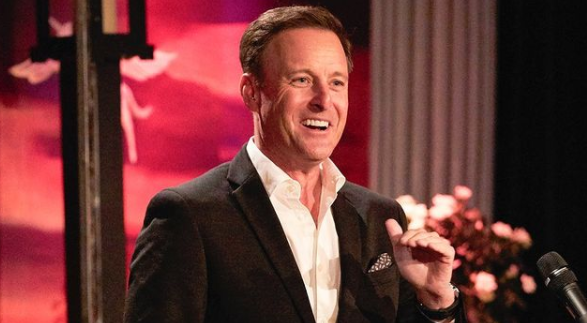 Fans love The Bachelor because of the drama. And not even two months into the 2021 season that is what the show has delivered, drama, drama, drama. When contestants appear on the show fans do better research on them than the FBI does on suspects. Now, they are looking at Bachelor host, Chris Harrison.

The tenacity that some fans of the show have in uncovering anything and everything about these people is scary. Honestly, mamma grizzly bears could take some notes. But the controversy this season began when posts from current contestant Rachel Kirkconnell Instagram were called into question.

One of the posts from 2018 where Kirkconnell attended an antebellum-themed party was particularly inflammatory to viewers. During a recent interview Bachelor host, Chris Harrison defends Kirkconnell. He asked fans “to give her a little grace, a little understanding, a little compassion,” which caused a backlash on social media the host never anticipated.

Petitions from fans of the franchise calling for the removal of Chris Harrison as the host of The Bachelor have gained a lot of traction. Harrison made his controversial statement in defense of Kirkconnell during an interview with former Bachelorette contestant and Extra host, Rachel Lindsay. Harrison also said, “So many fans are turning into the woke police, and tearing this girl’s life apart before she has been able to speak. It is unfair.”

But Harrison simply dug himself into a deeper hole and he has since issued an apology for his statements via social media. Harrison is now “stepping aside for a period of time” from The Bachelor franchise. But with no indication of how long this “period of time” will be, fans have already offered suggestions for potential replacements.

The first option to take over for Harrison that many fans considered is Wells Adams. Wells is a fan-favorite as the bartender for Bachelor in Paradise. Adams is engaged to Sarah Hyland. So he is preparing to enjoy his forever. But Wells had never considered the possibility of succeeding Harrison despite rumors that he was in line for the promotion.

People asked Adams if he could be the next host of The Bachelor franchise in January. Wells disregarded even the idea of that happening.

But we now know this is not the case, so Wells Adams may have an opportunity he never saw coming.

Other fans requested that Rachel Lindsay replace Chris Harrison. Rachel was the first person to publicly question Chris about Kirkconnell’s past. She has also been extremely vocal about issues she sees within the franchise. Although Lindsay was a much-loved Bachelorette, she is already a host on Extra. And she has previously stated her desire to distance herself from The Bachelor franchise.

On her podcast, Higher Learning, Rachel said, “I can’t take it anymore. I’m contractually bound in some ways. But when it’s up, I am too. I can’t do it anymore.”

Lindsay is not happy with The Bachelor franchise so would she even be willing to take part and maybe making a change?

Another option for a host that fans floated is the familiar face of Nick Viall. Nick has been around the franchise for years. He was a contestant on Season 10 and 11 of The Bachelorette. Viall ended up being the runner up in both seasons, making it to the final ceremony but never getting the rose.

Viall went on to participate in Season 3 of Bachelor in Paradise, but the season ended without a proposal from Viall. And all of this finally led to Nick being the star of The Bachelor Season 21 where he proposed to Vanessa Grimaldi. But the pair called it quits in August following the show.  Viall has a podcast The Viall Files but he addressed Chris Harrison’s controversial interview via Instagram.

“After seeing Chris’s very disappointing and harmful interview with Rachel, I have spent the past two days speaking with many people from Bachelor Nation including those involved. This is a teachable moment for us all. It can be uncomfortable to recognize our own ignorance, but without recognition, there can be no accountability and growth.”

The show required Chris to re-quarantine after he dropped off his son at college. ABC would not allow him to host remotely either. A source told Us Weekly, “Chris was not happy they were going to make him quarantine in Palm Springs for two weeks without working. He insisted he simply dropped his son off in his dorm room and left, social distancing the entire time.”

What is coming next for ‘The Bachelor’

Chris Harrison did issue a lengthy apology following the backlash to his interview with Rachel Lindsay. But the decision for taking some time away from the franchise came after. Furthermore, Kirkconnell has also broken her silence in regard to her past behavior. Although some people believe the apology is too little too late. They believe she should have responded sooner given the length of time since the news broke.

Some people believe that Kirkconnell wished to respond earlier. However, people kept her from issuing a statement. Reality Steve, a Bachelor sleuth and enthusiast believes Kirkconnell was being given bad advice. He tweeted, “I’ve been told that Rachael’s statement has been rejected by ABC,” and continued, “She’s listening to people she shouldn’t be.”

But at the end of the day, ABC is going to have to choose someone new to fill Harrison’s shoes during this interim.