The privacy of Julie and the Phantoms star Owen Joyner was invaded recently. And, true JATP fantoms are disgusted? What happened exactly and why are fans of the Netflix series so upset? Keep reading for the details.

Note: This article is considered an opinionated piece. It’s views are only that of the author. And, they do not reflect the site as a whole. Thank you.

At 20-years-old, Owen Joyner is a relatively young actor. He has a few credits to his name. But, he really landed in the spotlight with his role as Alex in Netflix’s Julie and the Phantoms. That being said, becoming a famous actor or actress isn’t all it is cracked up to be. It comes with a lot of unwanted attention. For someone new and young… This attention can be a little overwhelming. And, for a young man in his 20’s? It might even be hard to navigate how to live his life while dealing with being famous.

Owen Joyner hung out with two of his co-stars from the series recently. Jeremy Shada and Charlie Gillespie came to visit Owen. The Julie and the Phantoms trio spent a lot of time hanging out with fans of the series on Instagram Live. This included hanging out in a vehicle in Owen’s garage while streaming the series. They were joining fans in the push to make the series trend on Netflix. With the hopes Netflix would consider renewing for a Season 2.

During one of their live sessions, things got a little awkward when fans showed up at Owen’s house. The young star was understandably startled. After all, it wasn’t exactly safe for his address to be public information. The details on exactly what happened during this live session are a little unclear. But, fans haven’t been able to stop talking about it on Instagram.

True Julie And The Phantoms Fans Reached Out

On one Facebook fan group, I learned some fans had tried reaching out to Charlie. One fan in particular just wanted to know if the young actors were alright. They were just generally concerned with a fan crossing the line. As you can see in the screenshot below, Charlie appreciated the inquiry. He noted they were fine. Moreover, he reassured the fans in question we extremely sweet. He admits they did ask the ambitious fans not to share Owen’s address with anyone. Hoping this would not happen again. 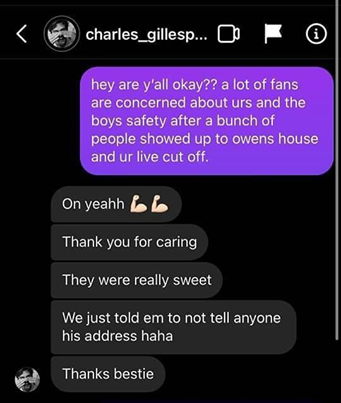 Still, true fantoms are concerned. Some wonder if Owen Joyner will consider moving. Others just wish fans would stop crossing lines and stalking the cast. As those who follow the stars on Instagram know this isn’t the first time something like this happened.

Madison Reyes had an issue early on in the release of the series with stalking. She reportedly took to her Instagram Stories to ask fans to stop following/bothering her friends. Being just 16-years-old, I can only imagine how terrifying that was for her.

Owen Joyner Has Been A Target Before

As we reported a while back, Owen has been a target before. There was an issue with a Twitter user encouraging Owen to end his life. The Twitter user spent a significant amount of time harassing Owen before fans of Julie and the Phantoms put the individual out of commission by repeatedly reporting them until Twitter stepped in. Fans were alarmed at how much time passed before Twitter stepped in. Likewise, they hoped Owen Joyner knew he had a life worth living.

Here’s hoping the cast can continue to stay safe. And, that fans will stop crossing lines. Moreover, here’s hoping Season 2 gets confirmed in the near future! Stick with us for the latest Julie and the Phantoms news.

Where Was Hallmark’s ‘Love In Glacier National: A National Park Romance’ Filmed?
‘Dr. Phil’ Ending TV Run After 21 Seasons
‘LPBW’ Zach Roloff Grossed Fans Out By What They Saw
Which Duggar Members Are Quiet About Jinger Vuolo’s Tell-All?
Hulu Cancels Another Popular Show After Just One Season