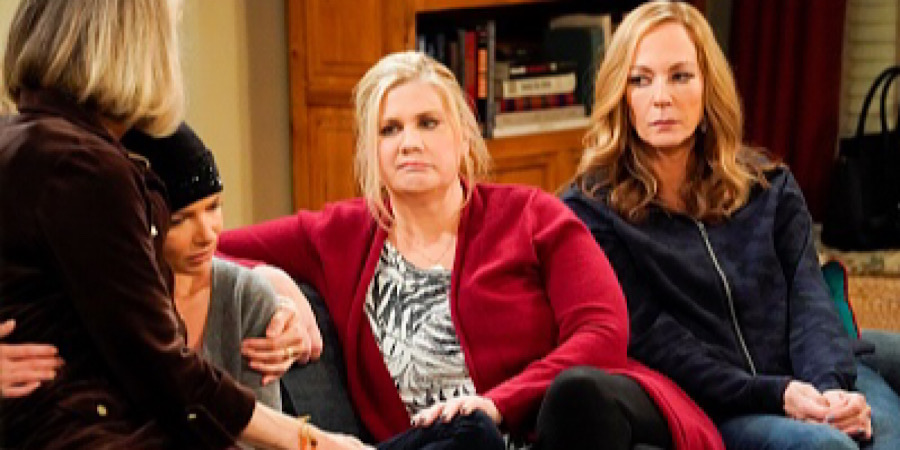 CBS’ hit comedy, Mom is back after a month-long hiatus. The fall finale saw the return of Bonnie’s late love, Alvin. He came to console Bonnie in a dream when Adam went on a ski trip. He had not been skiing since the sport had left him paralyzed. Jill was also dealing with her breakup from Andy by volunteering. But, she was doing less mentoring and more gossiping. Now, she is desperate to get Andy back that she will go to any length. This should be exciting- and dangerous.

Jill Struggles With the Breakup and Everybody Suffers

At the AA meeting, Jill confesses this pause with her and Andy is going on a little too long. It has been sixteen days and she wishes he was not the one who could “unpause” the break. She lets them know she is not going to relapse. Her credit card did get a nice workout. So much so that American Express called to check in on her. At least they care. During Bonnie’s share, she lets Jill know Andy and Adam are watching football together so she will get the gossip for her.

When Adam gets home, Bonnie accosts him about Andy. She wants to know if he said anything about Jill but apparently, he has a lot on his mind. Andy is breaking in a new partner and is trying to make Sargent. The new partner is a female, Joanna and this leads Bonnie to jump to conclusions. Luckily, Wendy knows her from the ER and she is very nice but that is all she can say. Jill starts interrogating Wendy as to what she looks like and such. At dinner, Adam slips and says Jill is a handful, per Andy’s words. This sets Bonnie off. Bonnie calls to check on Jill and she is spying on Andy and Joanna in her housekeepers car. Not going to end well.

Bonnie is teaching Jill how to stalk Andy and Joanna as they are driving behind them. They almost crash and Bonnie takes over the driving. Jill says maybe they should just go home but then she sees them pulling over and decides they need to keep going. She is also really bummed Joanna is average looking, which was his old type. Jill also does not want to lose him to someone less pretty than her because that means it is her insides he does not like. She decides to call him and Bonnie watches him check the caller ID then put the phone down. Bonnie calls and he answers so this makes Jill really wonder how he feels.

Tammy calls and finds out what they are doing so she decides to join them with licorice. They continue to follow Joanna and Andy until they arrest a drunk guy and bring him to the hospital. There, Wendy joins them and shares Joanna is dating a Desert Storm veteran. This leads Jill to believe Andy still loves her and she is thrilled. He soon shows up at the car and asks to speak with her. The ladies stay with their binoculars, waiting to find out what happens. She comes back and they have officially ended it because she is just too much for him. Jill gets consoled by Marjorie who reminds her she will meet someone again. She thought she wouldn’t after her divorce and she met Andy so there’s hope.

Mom returns on February 11th at 9pm only on CBS.