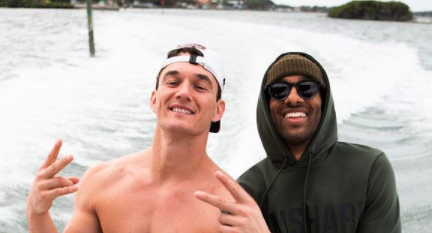 Talk about friendship – Bachelor Nation’s Matt James and Tyler Cameron got Brazilian waxes together. By the looks of the video, it wasn’t a great experience.

Tyler is pretty big into Youtube these days. Of course, seeing as Bachelor Matt James is his best friend, fans get to see him appear on the channel from time to time. This time though, the boys are having a little spa day People says.

Why did they decide to go through with this? Tyler says it’s so Matt can understand what all the girls fighting for his heart went through. Honestly, a woman can probably agree this is a fair trade.

“So Matt can have a real appreciation for these girls when they come out of the limo,” Tyler is heard saying in the video about getting Brazilian Waxes.

Apparently, they didn’t have a ton of fun – imagine that. However, he actually wanted it to be painful. That’s what they were going for.

“I saw 40-Year-Old Virgin and that looked painful, and that’s what I was going for,” Tyler says.

In the video itself, Matt and Tyler definitely went through that level of pain.

“We got waxed and we got wrecked,” Tyler writes on the video.

How is matt’s season going?

The Bachelor started back up two weeks ago. Fans have gotten to watch the drama unfold already as Matt makes his way towards finding love.

Now that the season has started, fans are finding out some interesting information. Including that a used condom was found during filming for the show by the resort staff.

“We actually found a used condom in the tree branch,” Maggie Hardy Knox, CEO of the resort, reports.

She continues by saying that because the grounds are so big, there can often be a lot going on in and outside that no one knows about.

“Sometimes there’s some hanky-panky going on where it should not have been, but I can’t tell you everything that was going on. We are on 3,000 acres,” she says. “So, there’s a lot of land and a lot of woods out there. There were things going on inside and outside of the hotel all the time.”

At least Matt was being safe!

Are you watching this season of The Bachelor with Matt James? Let us know what you think in the comments below. Come back to TV Shows Ace for more news on all of your favorite reality TV and Bachelor Nation stars.