‘LPBW‘ star Matt Roloff has received a lot of hate since his ex-wife Amy Roloff published her book. It called Matt Roloff out as a cheater. Did Matt cheat with his current girlfriend Caryn Chandler? Let’s see what the reality star has to say about these accusations.

How all the drama started between Amy and Matt

Amy published her memoirs, hinting that Matt was acting inappropriately with his “farm manager,” which we know is Caryn. She went on to say that she was around more and more often. Not only that, Amy went on to say, “I saw messages, pictures, and other things that should not have been shared between people who just worked together and were still married to other people. Amy hinted that Matt cheated but did the father of 4 really cheat on his wife? 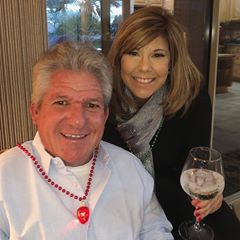 , Big World star  Matt has finally had to say something about Amy’s allegations of infidelity. Matt Roloff went on Instagram to post a cute picture of himself and his lover Caryn. In the caption, he wrote “@carynchandler1 and I sitting here amazed at the simple beautiful moon lingering brightly over the farm as if to say ‘Keep taking the high road. It’s the only one that matters!”

Matt Roloff talks in an interview

Matt says more about the allegations on a popular podcast. He addressed Amy’s book and what she said about the end of their marriage in more detail. “I didn’t think the book was really fair to me – for me knowing her real-life story,” the father said of the memoir during this interview. He went on to hint that he wasn’t with Caryn while he was married. Amy did admit that the alleged affair may have been more emotional than physical. Matt concluded the interview with, “I wish she wouldn’t have left out parts that would have changed people’s perspective on our marriage and the reasons our marriage had troubles, in the end, we grew apart.”

Matt Roloff and Amy Roloff both have moved on

After a rocky marriage, both Amy and Matt have moved on. Matt is currently living with Caryn talking about their engagement to be wed. And Amy is happily living together with her fiancé Chris Marek. The two are engaged and planning to get married next year. The two just recently held off their wedding plans till after the pandemic is over. Although the two are moving on in their life they work together as partners when it comes to Roloff Farms, as reported by The Hollywood Gossip.com.

Continue to follow Tvshowaces.com for more news on The Roloff family.