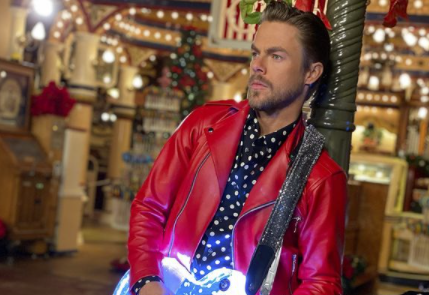 If you caught Dancing With The Stars this season, you probably noticed things looked a little different. For starters, there weren’t any audience members permitted. There weren’t any group numbers. And familiar face Len Goodman was absent from the judges’ table. The novel Coronavirus pandemic caused all these changes for Season 29. However, former pro Derek Hough stepped in to replace Len. And fans loved seeing his face again.

But some DWTS fans speculate Derek may become a permanent feature behind the judges’ table.

People Behind The Scenes Really Love Derek Hough Too

For starters, new hostess and executive producer Tyra Banks loves Derek Hough. She said so in nearly episode. And sources say she wants him to stick around. In the finale, she said she would love to find a way to keep Derek and welcome Len back too.

However, an insider reportedly told The Sun that Derek Hough is going to replace Len Goodman permanently.

“Len is a legend and has been a great servant to the show, but times are different and so are the considerations. Derek not only stepped in, but was a hit from the start. His work makes it almost impossible to not have him back,” the source allegedly said.

Fans missed the group numbers this year, but Derek’s special performances made up for it at least a little bit. His fiery Paso Doble with his girlfriend, Hayley Erbert, captivated viewers at home. He even performed a sweet solo during the finale. Most fans would be really excited to hear he’s returning for Season 30.

Len Goodman didn’t appear this year because of COVID-19 travel restrictions. However, he’s not getting any younger either. If Dancing With The Stars comes back next fall, he will be 77. And he reportedly has some health concerns too. Over the summer, the judge had skin cancer removed from his forehead.

Judge Carrie Ann Inaba reportedly would also love to have Derek Hough as a permanent member of the judging panel. But ABC hasn’t made any official announcements yet. In fact, Dancing With The Stars hasn’t even been officially renewed for Season 30 yet.

Of course, there isn’t any reason the show couldn’t have four judges. Past seasons have included four judges on several occasions. Len Goodman could totally return for another season and have Derek join the cast too. There’s room for everyone at the judges’ table.

So what do you think? Would you like for Derek Hough to make a permanent appearance on Dancing With The Stars? Or would you miss Len Goodman too much? Do you think they will both come back next season? Let us know what you think in the comments.