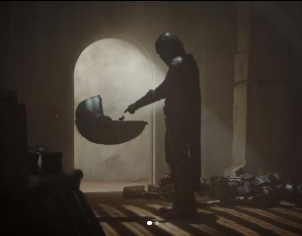 It seems like The Mandalorian didn’t have the force with him on the last episode. Fans spotted a funny little goof that would have made Yoda yelling “Done a goof-up you have”.

Who is that random guy on the set of The Mandalorian

In the last season 2, episode 4, some viewers pointed out the appearance of a random man. Not in attire from the movie, instead he was sporting jeans and a tee. The man was just casually standing outside of the frame. Looking odd to viewers, they knew right away he shouldn’t be there.

Although the guy isn’t very noticeable, he did stand out because of his modern clothes. Fans were watching an Imperial space station battle when they spotted the funny goof. The mishap was captured in a promotional picture also for the new episode. Viewers were surprised that the mistake was missed by director Carl Weathers, who was playing Greef Karga in this particular scene of The Mandalorian.

Funny jokes, the viewers have 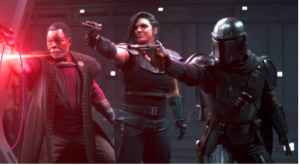 It seems like viewers are having a good time, talking about the mistake. Some of the jokes were from the dark side of the force! “I can’t wait for the comic book explaining this backstory,” one Twitter user joked about the new jeans and tee character. Another fan wrote: “It was just an off duty stormtrooper lol.” A third viewer joked, “Maybe it was just casual Friday!” Enough on The Mandalorian, let’s talk about another mishap that happened in a popular series.

Who remembers this happening?

Many people are reminiscing of another show that had its own funny issue that fans love to joke about still! Fans think that the Mandalorian’s goof is similar to the famous coffee cup incident during season 8 of Game of Thrones. Fans enjoyed laughing about that mishap just as much! This fan hit the nail on the hammer with this witty comment! “I imagine he’s the same one who left the Starbucks cup in GOT,” one fan tweeted, as first reported by Us Weekly

The screen caused so many jokes and a lot of laughter

During the final season, a Starbucks cup was accidentally left on the table during the fourth episode when the group was celebrating their Winterfell win 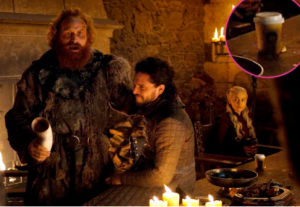 . Fans noticed the cup after the camera panned to Daenerys while Tormund gave a speech about Jon Snow. “Wow, Starbucks truly is everywhere,” Frozen star Patti Murin tweeted in May 2019 after seeing the error. Another fan wrote, “Guys it’s not Starbucks, it’s Winterfell’s own coffee chain ‘Dire cup.’” Ok, that has to be the best comment so far!

Fans seem to love spotting these little mistakes while others just come for the jokes. Tune in to @TVShowsAce for more updates on The Mandalorian.

‘LPBW’ Sneak Peek: Zach Roloff Gives Update On Feud With Dad
‘Chesapeake Shores’ Cast Has Last Supper, When Will Season 6 Premiere?
Katie Thurston Talks Closure & If She Would Do ‘The Bachelor’ Again
Who Is The Wealthiest Duggar? Family Net Worths Revealed
See Amber & Trent Johnston’s Before & After Weight Loss Transformations