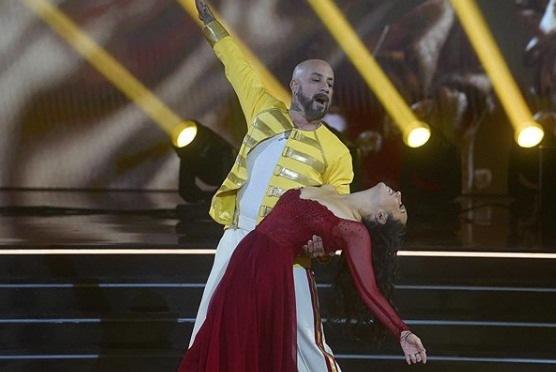 In case you missed it, Dancing With The Stars sent home another couple last night. This time it was Backstreet Boy AJ McLean and his partner, Cheryl Burke. Many fans were shocked to see them go home so early. Cheryl admitted she was pretty surprised too. AJ slipped up a bit in the beginning but recovered. However, the judges took points off because of the mistakes, leaving the couple at the bottom of the leader board for the night.

“There’s rules in ballroom, and as far as I’m concerned this is a ballroom show, I thought,” Cheryl told ET in frustration. She went on to say that scoring just doesn’t feel consistent this season. “I already had his other two routines choreographed for the Semi-Finals,” Cheryl added. “Normally I’m not that confident going in, but I was like, ‘For sure, there’s no way [we’ll get eliminated].'”

“I’ve always been one to bow out from whatever the situation is with ease and grace and with a lot of gratitude,” AJ chimed in. “Honest to God, I’ve made a lot of great friends here, both on the stage and off the stage.”

On tonight’s #DWTS, we are dancing to ‘Somebody To Love’ by one of the most iconic bands out there, @QueenWillRock!

This Could Be Cheryl Burke’s Final Season

“My hips don’t lie and I’m starting to get tendonitis,” Cheryl confessed during a recent podcast appearance. “For a woman, as far as ballroom dancing competitively goes, normally in their 30s [you retire]—I’m 36—so it’s time to hang up those shoes.”

Everyone will definitely miss Cheryl — she’s been a DWTS staple for so long. But all good things must come to an end eventually. If she does indeed plan to retire, she probably isn’t thrilled about the way the judges sent her and AJ home.

The Judges Faced A Difficult Choice

“We were crushed, to be completely transparent with you,” Johnny said. “It was not a nice position to be in the bottom two again. But the positives of tonight are we got a perfect 30! We danced our butts off and Britt gave me the ability to dance like that in one week.”

The Dancing With The Stars semi-finals takes place at 8 PM eastern time on Monday night. Tune in to ABC and don’t miss out on a single second. Who do you think will be the next to go home? Let us know what you think in the comments.