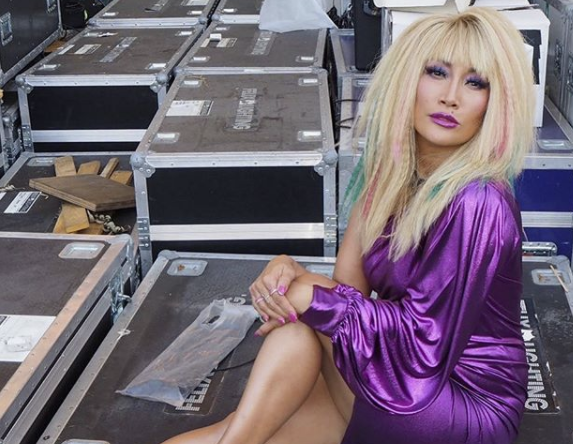 If you follow Dancing With The Stars online, you may have noticed fans aren’t so happy these days. The grievances vary from one week to another, but judge Carrie Ann Inaba is catching a lot of flack these days. Viewers argue she’s way too hard on contestants, particularly Kaitlyn Bristowe. But now, Carrie Ann is responding to some of the criticism.

“I still get bullied. Right about this time is when people start to bully me because of the way I judge people. I can’t believe it still happens as adults,” the DWTS judge said after Monday night’s episode. “I want to tell people who bully: It doesn’t make me change the way I judge. I’m not about to change because you try to bully me. It only makes me stand stronger in my convictions and what I believe in.”

“Just so you all know, for all of you trying to bully me about it, I judge the way I judge from my background,” Carrie Ann continued. “That is my job to do it and I will always do it based on my own conscience, not because you’re trying to tell me what to do.”

Kaitlyn Bristowe and her partner Artem Chigvintsev keep getting low scores from Carrie Ann. And no one really seems to know why. Artem said this week that the criticism is starting to seem really personal. It’s probably worth noting that Carrie Ann is Artem’s ex-girlfriend.

“At this point, it starts being a little personal,” Artem told Entertainment Tonight. “I feel it’s definitely, maybe not a different standard, but I feel like it’s different expectations. I don’t know. I’m watching back the dance itself, it’s like, ‘Oh, you can kick sharper!’ Well, I can say that about everybody who dances on the show today. I don’t know. It’s really odd.”

.@KaitlynBristowe is having such a good time in the #DWTS ballroom 🤩 #TeamWillYouAcceptThisDance cannot be stopped! ✋ pic.twitter.com/IDmiDai8Zr

Does She Have A Problem With Bachelor Nation Contestants?

In the interview, Kaitlyn noted that Carrie Ann was also really hard on last year’s winner, Hannah Brown. Kaitlyn couldn’t help but wonder if Carrie Ann just has a vendetta against the Bachelor Nation. The former Bachelorette says she feels like Derek Hough and Bruno Tonioli give her real feedback and criticism she can work with. Meanwhile, Carrie Ann Inaba just seems to nitpick.

“At this point right now we just feel like we’re never going to make her happy. It feels really discouraging, in a sense, to come back next week,” he says. “I was literally wanting to have ear muffs and put it on top of [Kaitlyn’s] head,” Artem quipped.

What do you think of the whole situation? Is Carrie Ann Inaba correct, or is she being way too harsh? We want to know what you think. Leave your opinions in the comments.