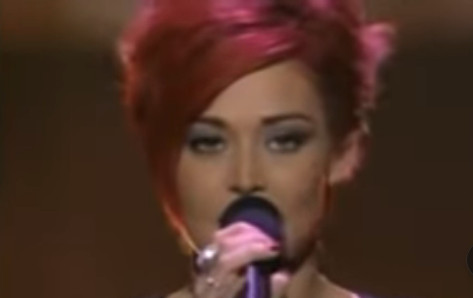 The American Idol community lost one of the most memorable singers from the first season of the competition. Nikki McKibbin passed away earlier this week. Her husband shared the sad news on Facebook.

Nikki McKibbin Passes Away at 42-Years-Old

While Nikki struggled with addiction in the past, that had nothing to do with her death. In an emotional note on his social media, Craig Sadler let fans know what happened to his wife. He wrote, “The love of my life Nikki Sadler [nee McKibbin] suffered an aneurysm on Wednesday.”

He noted that his beloved wife was an organ donor. Nikki McKibbin was also said she was a HUGE fan of Stevie Nicks. Since fans can’t gather due to COVID, he asked fans to listen to “Landslide” in Nikki’s honor.

FOX network first brought American Idol to fans back in 2002. The singing competition was an immediate smash with viewers. Nikki McKibbin was a competitor in Season 1 of the show. She breezed through the auditions with covers of songs such as Alannah Myles’ “Black Velvet.” Watch her rendition below.

Nikki was in the top three, along with Kelly Clarkson and Justin Guarini. She ended up being sent home in third place. Kelly Clarkson went on to win that first season. But Nikki McKibbin earned a lot of fans, too.

In 2008, she was on the show Celebrity Rehab With Dr. Drew. Guns ‘N Roses member Steven Adler was also on that season.

TV Line reports that Nikki McKibbin briefly returned to Season 13 of American Idol. But not as a contestant. She was accompanying her son to the competition. However, he didn’t make it to the live shows.

Fans and Former Competitors Reach Out

Many fans were sad to hear the news about Nikki McKibbin. American Idol runner-up Justin Guarini paid tribute to the “fiery, funny lady.” His tribute recalled the time Stevie Nicks herself sent Nikki McKibbin flowers. He wrote that Nikki was “on cloud nine” because of the gesture.

In the comments on the YouTube video from above, fans shared their favorite songs Nikki sang on the show. One fan wrote, “I will always remember you and this voice.”

Even though she didn’t win her season of American Idol, fans will never forget Nikki McKibbin.

Our deepest condolences to the family, friends, and fans of Nikki McKibbin. In honor of the spitfire, listen to Fleetwood Mac’s “Landslide.”