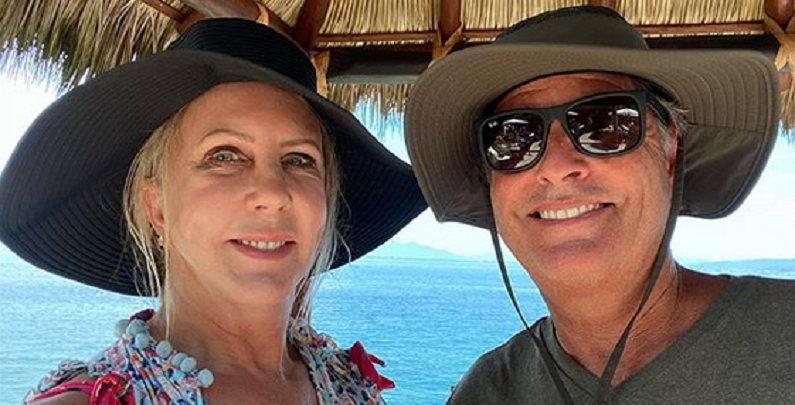 Vicki Gunvalson denied the rumors that she split from Steve Lodge. RHOC fans speculated about their split when they both unfollowed each other on social media. The Season 14 finale centered around their engagement. Vicki dropped hints that she wanted to fill her love tank with an engagement, and he finally made it happen.

She previously discussed their wedding plans. The OG of the OC said she wants a small and intimate wedding with family. She also hinted that she wanted it filmed for the reality show, before her exit. However, she left the show earlier this year.

So, is the couple still together?

The RHOC star indirectly responded to a fan who speculated about her split with Steve Lodge. One fan account noted that the 58-year-old entrepreneur and her 61-year-old fiance unfollowed each other on social media. Additionally, the two haven’t posted a photo together since September. Now, Vicki is laughing off the rumors in a new interview.

“I have no fricking idea where this came from,” she revealed exclusively to Us Weekly on Monday, October 26. “Someone bored trying to stir crap up.” She claimed that the two “are fine” and are still happily engaged.

“We live together and live a very private romantic life,” Vicki continued. “We don’t follow each other on social media and haven’t for a long time, and we don’t post photos of each other – what’s the point?”

Then, she called the split rumors “a complete joke and not even worth commenting, but I did.” The pair planned to wed in April, but they had to postpone their nuptials due to the coronavirus pandemic. Fans are wondering whether Steve has cold feet. Vicki has declared that they still plan to get married. It’s just all a matter as to when.

“We’re still going to get married .. [but I’m not] rushing to get down the aisle right now,” Vicki previously told HollywoodLife back in April.

How did the split rumors start?

RHOC fans assumed the couple ended their relationship. According to Reality Tea, Vicki Gunvalson and Steve Lodge no longer follow each other on social media. However, it’s unclear whether they followed each other at all. Some find this revelation strange.

But it’s common among most couples. Lala Kent and Randall Emmett revealed that they don’t follow each other on social media. They don’t want any outside forces to ruin their relationship. Even Below Deck Mediterranean’s Chef Tom Checketts recently revealed that he unfollowed now ex-girlfriend Malia White on Instagram. He couldn’t handle the backlash from being associated with her.

While it’s common, some fans think it’s still a red flag in Vicki and Steve’s relationship. Some of them don’t have high hopes for this couple. What are your thoughts? Do you think they will end up getting married? Sound off below in the comments section.

Josh Duggar‘s Defense Goes To War: Objects Max Sentencing
Kelly Clarkson Fans Devastated Over ‘The Voice’ Season 22 News
Becca Tilley Shares Heartfelt Message To Girlfriend
‘Yellowstone’ Season 5 Is Biggest Ever: When Is Premiere, Who Is Back?
Where Were Kourtney Kardashian’s Kids When She Got Married?