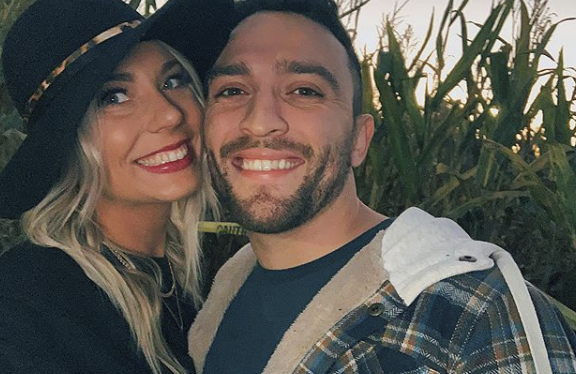 It seems like Mark Cuevas is finally getting his happily ever after. After things went south with his Love Is Blind co-star Jessica Batten, fans weren’t sure that Mark was in a good place. After all, Mark remained insistent that Jessica was “the one,” even after she left him at the altar at the end of the season.

But now, Mark has some great news to share. He and his girlfriend, Aubrey Rainey, are expecting a baby together. And even though it isn’t where he imagined his life headed, he couldn’t be happier.

“I went into the wedding day just being like, ‘I’m going to be in the moment.’ I, like, blacked out, I think I was just so nervous,” Mark told Us Weekly. “At the end of it, she didn’t want to [get married] and it’s OK. I look back at it now and it’s like, everything happened the way it’s supposed to happen.”

After everything that happened, Mark’s fans are so happy he has a new family to love. The Love Is Blind star recently posted a sweet photo on his Instagram page, captioned, “Baby Cuevas 4.29.21.”

Mark Cuevas Has Been Unlucky In Love Up Until Now

If you haven’t been keeping up with Mark Cuevas, then you may not know that he hasn’t been so lucky in the romance department. His romance with Jessica Batten ended in disaster, but that wasn’t where it ended.

Earlier this year, Mark was in a relationship with another Love Is Blind contestant, Lauren “LC” Chamberlain. She ended it over cheating allegations. One Reddit user posted that their friend was dating Mark, and LC saw.

“This is awkward because I live in Atlanta and I’ve been dating Mark since the beginning of May. Oh and btw, this is LC from Love is Blind,” LC replied. “But I definitely just broke it off with Mark so I really do appreciate you posting this and saving me the energy on dating another liar.”

But according to Mark, this wasn’t the complete story.

“I enjoyed spending time with LC for a few weeks, but at no point were we in an exclusive relationship, as LC confirmed herself. I wish her the absolute best,” Mark later told Us Weekly.

In July, Mark made his relationship with Aubrey public. It really seems like they will be happy together. His Love Is Blind co-stars think so too. Damian Powers and Giannina Gibelli commented their well wishes on the pregnancy announcement photo.

Love Is Blind reported back in March they were holding auditions for Season 2. However, it’s entirely possible the Coronavirus pandemic got in the way. We may have to wait a little longer before we ever see Season 2. However, we can be sure it will be exciting and dramatic when it finally comes out. In the mean time, you can always follow the Season 1 cast on social media.