It’s the end of an era this week on Days of Our Lives. Actress Kristian Alfonso’s final scenes as Hope Brady air later this week. Since her decision to leave came months after filming, her exit doesn’t give fans any closure.

What do we know about Hope and Kristian Alfonso’s final scenes?

Kristian Alfonso’s announcement in July that she was leaving DOOL ROCKED the soap community. She has been portraying Hope Brady on-and-off for 37 years. For many fans, the actress has been a staple throughout their days of watching Days of Our Lives.

Hope Williams Brady is a legacy character, the granddaughter of Alice Horton (Frances Reid.) The romance between Hope and Bo Brady (Peter Reckell) is one for the soap history books! Peter Reckell left the soap in 2015. He requested for Bo to die to wrap the story up. The character succumbed in the arms of his true love, Hope.

Hope’s daughter, Ciara (Victoria Konefal,) is presumed dead on DOOL. She’s teamed up with Ciara’s love interest, Ben (Robert Scott Wilson) to find out what happened to Ciara. This week, the pair get bad news and then it seems Hope just quietly disappears from the canvas.

The actress shared photos from her final scenes on her Instagram. 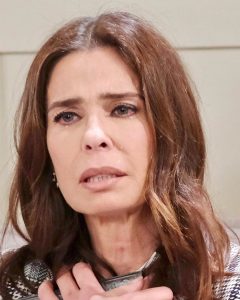 Could She Return to Wrap Up Storyline?

At the time of her exit interview, it did not sound like Kristian Alfonso would be open to returning for a short stint. However, anything can – and usually does – happen when it comes to DOOL. Due to the actress leaving when the show wasn’t filming new episodes, Hope’s exit will be abrupt.

TV Line reports that her last air date will be Wednesday, October 14, 2020. You can read what else happens on DOOL this week here.

Needless to say, DOOL fans are VERY upset about Kristian Alfonso and Hope leaving the show. While the soap could recast the role, it would be difficult for the audience to accept anyone trying to fill her heels. It’s going to be hard enough for fans to accept All My Children actress Cady McClain temporarily stepping in to play Jennifer Horton Deveraux. (Melissa Reeves, who just celebrated her 35th anniversary of her DOOL debut, chose not to resume production during the pandemic.)

Fans took to Kristian Alfonso’s Instagram post about her final days to say goodbye. Some of the comments include:

Will you miss Kristian Alfonso as Hope? Head over to our Facebook page and drop a comment.