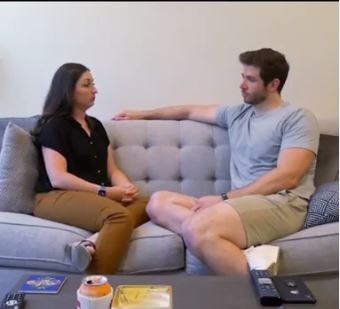 In a typical Married at First Sight season, fans would never see an episode like October 7’s “Home Alone.” Like millions of lives across the globe, the virus pandemic changed the lives of the newlyweds in profound ways, halting the production of the arranged-marriage reality show.  This week was intended to be Decision Day, but those fateful conclusions were postponed when New Orleans went under shutdown orders and the only production permitted was from the couples themselves.

The remarkable thing about being trapped together with a stranger, even one known and loved by now, as two of the Married at First Sight matches have found, is that it makes everything superficial slide away.  The truth comes to the surface for the five couples this week, and one calls it quits sooner than expected.

Brett and Olivia end their ‘Married at First Sight’ mismatch

Pastor Cal Roberson and Dr. Pepper Schwartz do their best to offer virtual guidance to the New Orleans matches in lieu of in-person visits.  The Married at First Sight experts cut to the chase and got to the root of problems running the relationships into the ditch or keeping them on the right track.  From the outset, it was a long-odds bet that good-hearted Olivia would be able to cajole player Brett into a meaningful relationship.  Pepper Schwartz admitted that she just hoped that having cats and sports in common would be enough to fertilize deeper roots.

As much as Brett cared about doing “the show,” and not about his wife, it was unusual that he did not stick it out.  The Married at First Sight groom only really got engaged if there was one of his passions, or alcohol, involved. He countered to Pastor Cal that Olivia never really made an effort toward intimacy and never once came to his house to explore how they could blend their lives together. It was painful to see the pair so “alone together.” Brett told Roberson that he moved out of their shared apartment because cat squabbles were getting injurious to his pet. Yahoo noted the upheaval, but nothing explains why penny-pinching Brett took every smidge of food from the pantry and refrigerator.

In their final face-to-face, Brett left the sarcasm, and he and Olivia opted for divorce as the best option. Hopefully, lessons learned will lead to a brighter future.

Miles makes a stand for his ‘Married at First Sight’ needs

For the duration of their marital relationship, Miles had made concessions to Karen. He hoped to prove himself to his Married at First Sight bride as the genuine, caring, and patient man that he is.  Last week, the pair seemed to be making progress after taking the advice of Dr. Viviana Coles to take consummating their vows off the table until after Decision Day.  The aim was to free the husband and wife to enjoy kisses, snuggles, hand-holding, and other flirtatious expressions without the pressure of complete intimacy.  They looked like they were getting there by baby steps until the shutdown brought a shutdown between the two.

“She doesn’t even want me there,” Miles declared of his wife.  He admitted that his mental health issues were giving hi if he can m darker mood swings. He craved someone to greet him with a hug or offer a caring touch.  Instead, Married at First Sight surveillance cameras in one scene show him moving his head to Karen’s shoulder,  she doesn’t turn her head. Miles also took offense that she questioned his masculinity.  “She wants a strong, masculine guy, but she’s not ready to respond to a progressive dude” (like himself).  He questioned whether she was capable of giving him what he needed.

Pepper Schwartz warns Karen that she “could be letting go of the greatest guy in your life,” during their session.

When Pastor Cal asked whether he could follow through with his marriage until Decision Day, Miles replied “I don’t know.”

Another Married at First Sight hubby who doesn’t know if he can do the “digging” that Pastor Cal insists is required to salvage his marriage is Henry.  The cautious health recruiter revealed to Pastor Cal that “there’s been a pattern of mistruths” from Christina since the beginning.  He begins with the example of where Christina says she lives.  She claimed to live in the central business district but was transporting all her goods in her car, while others were in storage.

Henry gave a recent tale from his bride.  Christina said she was going for a walk at 2 PM, but she was dressed up in made up, like she was hitting the town.  Henry turned in at 1 AM, supposing that she didn’t get home until after 2:00.   There was never a discussion of these issues.  Pastor Cal insisted that Henry had to confront Christina about his suspicions.

In contrast, Pepper Schwartz directed Christina to “give Henry a roadmap,” and explain her needs while holding Henry’s hands.  One odd omission happened for the wife who always craves caring gestures.  She completely forgot Henry’s birthday, while others in his life overloaded him with calls, gifts, and cake.  She wondered aloud to Schwartz why Henry never returned from his daily trips to the store with flowers or food that she liked.

Christina never extended the suggestion of holding hands.   She was so incensed over the different stories involving her residence that she rushed away in tears, saying that she was “mentally exhausted.”

Near the end of the episode, Henry relates that Christina asked for a meeting with him.  She pushed him regarding whether he was involved in another relationship.  She supposedly received a text from a knowledgeable source that Henry was in a relationship with another man.  He fervently denied the allegations and pledged to refute them.

After a trio of forlorn partner struggles on Married at First Sight, it feels like fresh sunshine to see the smiles from Amelia and Bennett, who looked to be thriving under the “crazy” conditions.  Both partners brought up the same subjects with Pastor Cal and Pepper Schwartz– having kids and the move to Richmond for Amelia’s residency.

The ever-original couple playfully noted that the greater number of rats on the street had led them to consider adopting a rat so that Bennett could have “practice with little ones.”  Even though Amelia wants to heed the cry of her ovaries, she also wants her husband to be “excited” about babies, and she’s willing to wait for that to happen in her Married at First Sight journey.  The bride already made one big change– a lovely quarantine haircut.

Bennett tries to bridge the gap

Bennett admitted to Pastor Cal that he needed to establish a more “viable” relationship with work, especially in “this exceptional circumstance.” It’s very hard to make a living as a pedi-cab driver when no one is even walking on the sidewalks.  The sweetest moment between this Married at First Sight match arose when Bennett announced: “There’s something I haven’t told you.” The husband told his wife that he would “split my time between here and Virginia.” Amelia pledged to do all she could to make sure that Bennett loved Virginia.

There’s no doubt that Bennett loves Amelia.  There’s no doubt that he wants to support her and their relationship.  Whether he can fulfill that commitment could be another story in the weeks to come.  The apartment with  Amelia is the farthest he’s ever lived from home.  The fans are fervently in this couple’s corner.  Let’s hope they can follow their hearts and make it work.

Mrs. Amani Randall confessed last week that she could feel herself getting closer to the “Love Train” station.  This week, the conscientious and caring wife goes all the way with a commitment on Married at First Sight.  She gives Woody a series of gifts for the senses, and the final one is her words of love.

The tensest and joyful moments sometimes coincide in life, and playful poking into direct messages blows up into bigger conflict between this beloved couple.  These two have a remarkable gift for talking and really listening.  Amani related that she and Woody never let an argument go “into the next day.” The couple consistently impresses Pastor Cal with their communication and maturity. Both partners brought up the conflict and conveyed how they resolved it.

Pastor Cal chided Woody on the issue of wanting children sooner, advising him not to go “without a jacket” so that children could arrive sooner.  When Amani mentioned having a “Scorpio puppy” before their “Scorpio baby,” Woody was not sold.   Still, the lovebirds made a sweet announcement of their growing “black love.”

Woody worries about being “the guy” in these uncertain days.  “You are enough,” Amani assures him.  This unique Married at First Sight match gives everyone confidence in the future, still believing in love.

The fun and games are far from over.  Next week is the couples’ retreat,