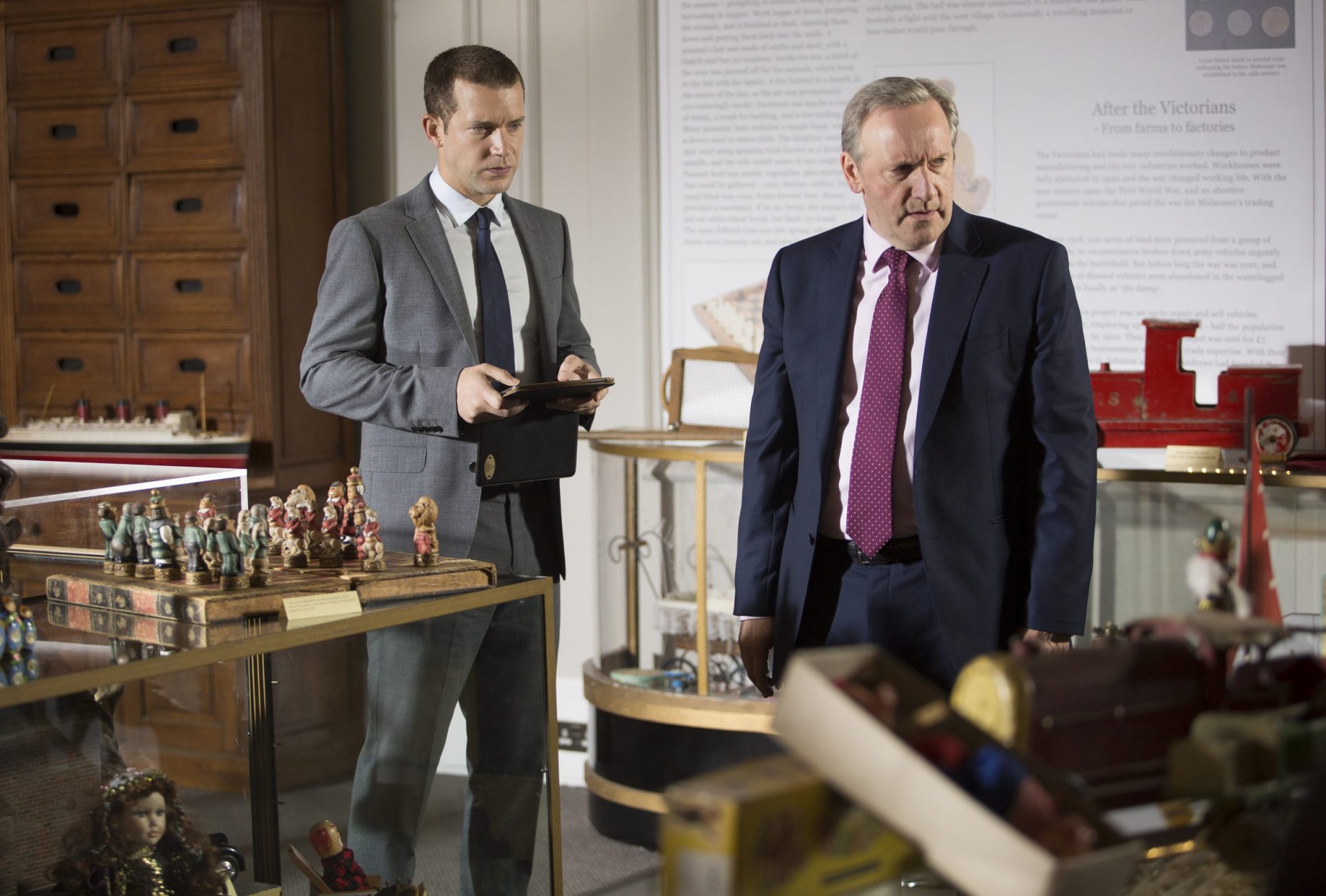 Midsomer Murders fans can now rejoice! Season 22 is now under way. On Wednesday, they began filming. Who is coming back and what else do we know about the new season?

The post continued, “Neil Dudgeon told us, ‘Everyone is excited to be back to work. Sadly there won’t be as much hugging and kissing on set as usual but we’ve all got to make sacrifices! It’s bound to be a bit strange at first with all the safety protocols but hopefully we can all keep each other safe and shoot another great series.’
We’ll be bringing you more from behind-the-scenes of Series 22 very soon…”

They are now filming the episode entitled, “The Wolf Hunter of Little Worthy.” The director is Matt Carter. He has filmed episodes for several popular British mystery series, including Agatha Raisin, Shakespeare & Hathaway, Father Brown, and of course, Midsomer Murders.

The director of photography is Al Beech. Beech has the same sort of work DNA as Carter, including Holby City, Agatha Raisin, Shakespeare & Hathaway and Midsomer Murders.

We already know a bit about the storylines. According to TV Zone UK, some of the Series 22 plots include: One episodes where “an urban myth becoming a murderous reality.” Next episode synopsis is about “a post-operative heart rehabilitation club whose members’ dreams of a second chance at life are cut short.” Next, there will be an episode based around a murder mystery weekend. Lastly, the fourth episode will be about “a twisted scarecrow festival and an amateur dramatics company with deadly secrets.”

That sounds like Midsomer Murders Season 22 will have four episodes.

Who is Returning For Midsomer Murders Season 22?

Who is returning To Midsomer Murders? Now playing this role for 10 years, Neil Dudgeon is back as DCI Barnaby. Nick Hendrix is also returning as DS Jamie Winter. Dr. Fleur Perkins is back in Midsomer, with Annette Badland returning to play the very outgoing pathologist.

We know Fiona Dolman is returning as Sarah Barnaby. Dolman recently tweeted that filming would start soon. As for Paddy fans, our favorite Barnaby fur-child is returning as well.

They have already announced that Amanda Abbington (Sherlock), Mark Williams (Father Brown) and Maimie McCoy (All Creatures Great And Small) will all be guest starring in Season 22.

Although Midsomer Murders alum, John Nettles, who announced his retirement from the show back in 2009, was spotted in the Scottish Highlands. The Grand Tour’s Jeremy Clarkson shared an Instagram photo of the the actor who played Tom Barnaby.

Nettles, who will turn 77 on October 10, appeared to be headed into a navy, with white racing stripes, Ford Escort 1600 Sport MK2. Will he be appearing in the Scotland episode of the Amazon Prime show? We don’t know. But wouldn’t it be fun to see John Nettles race Jeremy Clarkson, Richard Hammond and James May?

When Is Midsomer Murders Series 22 Coming Out?

When is Midsomer Murders Season 22, or as the Brits say, Series 22, coming out? Likely in 2021.  Acorn TV or Britbox subscribers will likely get to see the episodes first, with worldwide television stations airing the episodes at a later time.

Some in the U.K. are still waiting to see the fourth episode of Midsomer Murders Series 21.