Too close for comfort? Some fans are questioning if Todd Chrisley has an unhealthy and potentially “creepy” relationship with his daughter Savannah. Just what caused this topic of conversation to come up? Well, fans started discussing Todd’s relationship with Savannah in his tribute to her for National Daughter’s Day. And, for some, the relationship makes them uncomfortable.

Todd Chrisley catches heat for only paying tribute to Savannah

National Daughter’s Day was on September 25th. Todd Chrisley ALWAYS pays tribute to his beautiful daughter Savannah. It, however, has been a pretty long time since he has been on good terms with his “other daughter.” It, however, can be argued that Todd Chrisley technically has three daughters (if you count Chloe). And, some fans were not too happy that he didn’t mention her on National Daughter’s Day either.

But, why do fans think he has a “creepy” and uncomfortable relationship with Savannah? Well, the topic came up after one fan encouraged him to be a good father and the “bigger person” in his relationship with his daughter Lindsie.

“You as a father should acknowledge your other daughter as well, yes even if you are estranged at the moment, be the bigger person, you know she’s needs your love as well.” An individual penned in a comment that has been liked over 700 times.

One individual chimed in agreeing with the person who left the comment above: “He has an obsession with Savannah. He should acknowledge the other daughter no matter what is going on. Bottom line is that she is still his daughter.”

Several others, however, joined in and the conversation spun out of control.

Does he have an unhealthy obsession with his daughter?

One individual went as far as comparing Todd Chrisley to Donald Trump. They admitted they were completely creeped out by his relationship with Savannah.

“AMEN, his relationship with Savanah is as creepy as Trump and Ivanka. I quit watching after I found out all the crap he did to his other daughter. So sad and people think he’s such a great father #creepyoldwhitedude,” one individual penned. 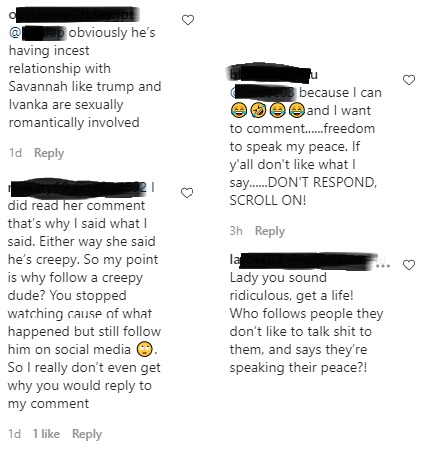 Another seemed to agree: “Right? He does have a weird obsession with this daughter.”

Naturally, not everyone on Todd Chrisley’s page is out to get him. Many were quick to rush to his defense. They were horrified that someone would suggest his relationship with Savannah was inappropriate.

One of his supporters pointed out how strange it was that someone would follow a person they described as a “creepy white dude.”

Other fans noted there was nothing wrong with loving and supporting your daughter.

So, do you think Todd Chrisley and Savannah have a creepy and inappropriate relationship? Sound off in the comments.