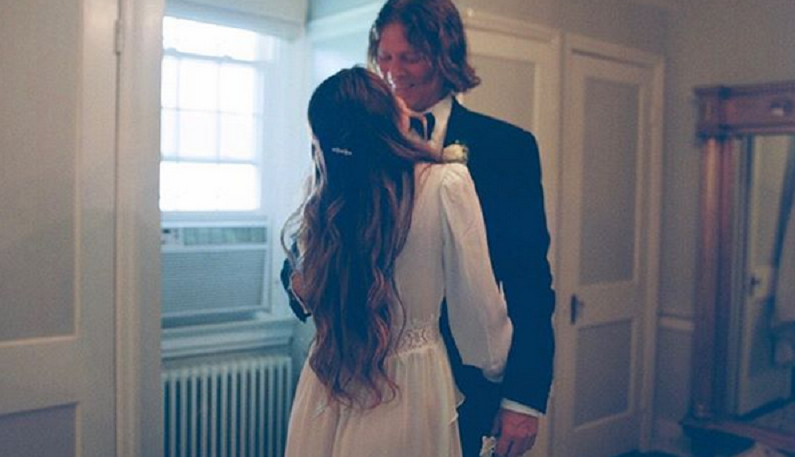 Dynasty star Liz Gillies surprised fans when she shared the photos of her secret wedding to Michael Corcoran. The 27-year-old actress and the 47-year-old music composer got married in an intimate ceremony with family. Earlier this week, she shared the exclusive photos of their New Jersey nuptials. The couple said “I do” on April 25.

But some fans didn’t even know Liz was engaged, let alone dating someone. Most of them took to Liz’s Instagram posts to talk about the startling 20-year age gap. Some wondered when Liz and Michael started dating. Michael was a producer on the Nickelodeon show, Victorious, which Liz starred on.

Who is Michael Corcoran?

The mystery man is a well-known music producer. He wrote music for several Nickelodeon shows, including Victorious. In addition, he wrote the theme song for Drake and Josh, Harvey Danger, iCarly, iParty with Victorious, The Troop, and Zoey 101. He also made his foray into the Disney Channel by composing the music for Shake It Up.

Most fans know him as Backhouse Mike. He also fronted a band of the same name. They even performed on an old episode of iCarly. In addition, their song “Take Me Back” appears on the show’s soundtrack. Backhouse Mike also appeared on the final episode of Zoey 101 as the fake punk rock band Backflesh.

Under that pseudonym, he created many songs for several years. Not only did he write for children’s shows, but he also wrote jingles for commercials with his collaborator C.J. Abraham. During the time, they were known as Backhouse Mike & The Super Chris.

When did Liz Gillies and Backhouse Mike start dating?

Now, this is where it gets confusing. Liz Gillies started acting when she was a child. Then she found fame on the hit Nickelodeon sitcom Victorious, which was about a Hollywood performing arts high school for teens trying to make it big. The popular series, which also starred her friend, Ariana Grande, ran for four seasons from 2010 to 2013.

At the time, Liz was only 16 or 17. Meanwhile, Michael was 36 or 37 when they met. So, they must’ve known each other when she was a teenager. However, she told Vogue that she and Michael had “been dating for six years when they decided it was ultimately time to get married.” Liz did mention their past though, adding, “I always had a crush on him. But I played it cool.”

Fans concerned over the timing of Liz and Michael’s relationship

Ever since Liz Gillies started posting photos of her wedding, fans have been in a state of shock. That’s because she kept her relationship a secret, even on social media. Most of them didn’t even know she was dating someone. But some are concerned over the timing of their relationship.

They’re not comfortable with knowing that Liz met her husband when she was just a teenager.

“found out last year, I think they met on Victorious?” one fan wrote in Liz’s recent post.

“she was 15 n he was like 35…” another fan added with concerned face emojis.

“he was one of the musical producers for victorious, n once she turned 18, they moved in together…” a third follower said. “meaning that he had interest in her BEFORE she was 18.”

“I love liz sm, i hope this is right n she is safe,” a follower concluded.

The obvious age gap in their relationship is probably why Liz kept it quiet. Or, it could be that Michael is a private person as well. But fans noticed that he would share posts of himself with Liz on social media. While most fans are happy for Liz, they hope she’s happy.