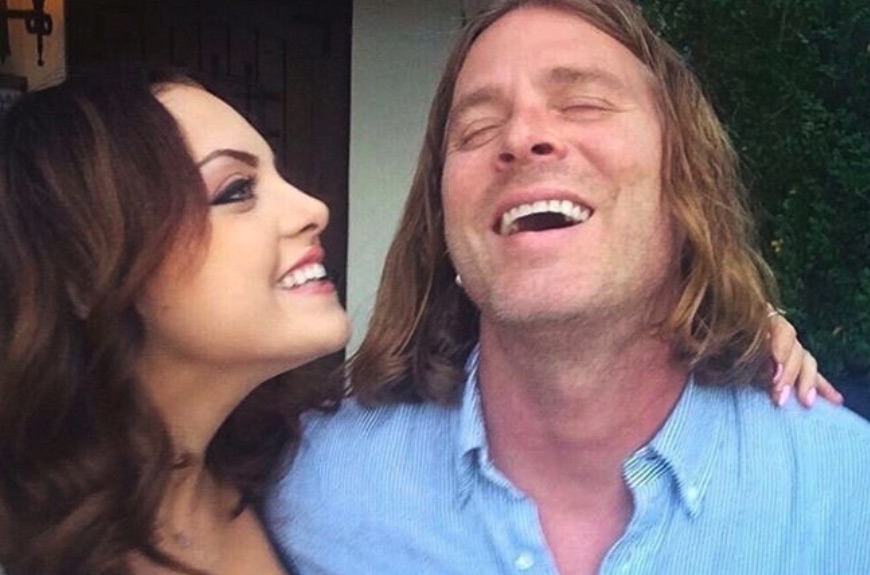 On Wednesday, Dynasty star Liz Gillies shocked everyone when she announced that she was already married. Who is the lucky man? Michael Corcoran, who she first met when she was just a teen.

On Wednesday, Vogue released the surprising news that Dynasty star Liz Gillies married composer Michael Corcoran. This came out of the blue! In front of their closest family, including both of Elizabeth’s grandmothers, the couple married in a very small wedding venue in the middle of New Jersey.

Her father walked her down the aisle, then went to the front to officiate the wedding. He got ordained especially for this special event. The bride wore a bespoke Britt Woods Design gone. As she has worn a lot of bridal gowns on Dynasty already, she wanted a simple, but elegant gown. Their two dogs wore floral collars and Michael’s mom walked older dog, Bubba, who also was the ring bearer.

They had a beautiful wedding, but it was not the wedding they planned.

Originally, the couple had set a date of April 25, 2020. This auspicious date is also their French bull dog Otis’s birthday. They planned on a lavish celebration at the St. Regis in Atlanta. But, as the coronavirus crisis became more serious, Elizabeth shared that “Once we saw how dire the situation was, we knew we had to postpone.”

They were not about to let grandmothers and friends risk their safety to attend their big shindig. In addition, while others suffered, they felt it was inappropriate to be partying. Michael shared, “A big, extravagant experience in the middle of a pandemic didn’t make any sense.” As time went on, they decided instead of postponing, they just didn’t want to do anything big. They decided to go very small.

That is when they decided to have a simple wedding in New Jersey. Within a month, they planned the whole event. They looked for places to have a “micro wedding.” This is a sort of event where a small group of relations could safely drive to the event. They picked a small,  New Jersey, Colonial farm at the Inn at Fernbrook Farms after her family went over to check it out.

Because they were so careful, and Elizabeth didn’t “feel comfortable flying,” they packed up the dogs and rented a Class A RV. They drove all the way up. They got there two weeks before the wedding. There, at Liz’s childhood home, they took it easy and enjoyed quiet time. When it came time for the wedding, they all dressed up. That is because everyone had already purchased fancy duds for their original wedding. But, the bride did her own hair and makeup, as well as her grandma’s hair.

After farm-to-table dining, they all danced to Pat and Sean Kelly, brothers who play guitar and percussion. The musicians share the same musical taste as Michael and Liz and were perfect. At the end of the night, they got into comfy pjs and made s’mores in front of the fire.

Liz Gillies met composer and producer Michael Corcoran “years ago.” He has worked with her friend and former costar Ariana Grande, and other Nickelodean performers. She admits she “always had a crush on him.” But, after playing it “cool,” they wound up dating several years later, when she reached her 20s. That age gap aside, Elizabeth’s dating status was hot topic. But, she kept that cool too.

For the longest time, there has been a lot of speculation as to who Elizabeth Gillies was dating. She frequently posts on Instagram and Twitter, it seems like her life was an open book. Yet, Elizabeth Gillies kept mum about who she was dating. Many speculated that she was dating her Victorious costar, Matt Bennett. Then, there was her other Victorious costar, Avan Jogia. They seemed to joke that they were hooking up, but he was clearly just her friend.

But there was one small tweet that slyly confirmed her relationship status, without really being Instagram official. That is what Dynasty fans should have noticed.

On October 25, 2016 Liz went to Twitter with a video clip. She wrote, “My boyfriend Michael voiced all of the wacky forest creatures in this clip, making it my favorite. Check it out.”

Right before Dynasty, Elizabeth Gillies starred in the Dennis Leary series, Sex&Drugs&Rock&Roll. She portrayed Gigi, the daughter of aged rock star, Johnny Rock (Leary), who decided to get the band back together. This includes Flash (John Corbett), the key estranged bandmate. Things got uncomfortable for dad when Gigi and Flash became an item.

In a very meta way, life and art interchanged. The series aired in 2015-2016, about the time Gillies and Corcoran started dating.

Now, the couple are happily married. The question is, will their next project be musical? How about that rock album she has always wanted to make?

Anna Johnston Says 17 Looks Good On Sister Emma
‘LPBW’ Fans Want To Know What Tori Roloff’s Job Is?
Blake Horstmann, Giannina Gibelli, Are They Still Together?
‘Big Brother’ Season 24: What Is Known So Far?
‘Yellowstone’ Season 5 Preview: Who Does Beth Hate As Much As Jamie?