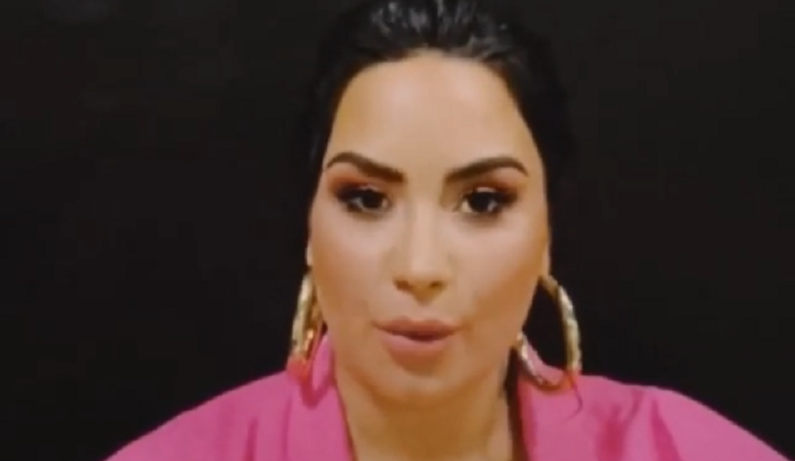 Over the weekend, Demi Lovato fans dug up Max Ehrich’s tweets. In most of the tweets, he declares his love for Selena Gomez. There are also tweets about him talking about Ariana Grande, Gigi Hadid, and Miley Cyrus. After fans dragged Max for his old social media messages, he deleted his Twitter account.

However, Demi is speaking up for her man. On Sunday, September 13, she took to her Instagram Stories to speak out about the alleged social media posts. She denies that he wrote them in the first place. Demi asks followers to concentrate on Breonna Taylor, a young Black woman who was killed in police custody.

The singer doesn’t understand why fans are pitting women against each other. However, this united the Selena Gomez and Demi Lovato fans against her fiance, Max Ehrich. Fans haven’t gotten along this well since Demi and Selena’s joint Disney Channel film, Princess Protection Program in 2009. But Demi wants her fans to focus on something else.

“It’s really sad when people FAKE images to put women against each other,” Demi wrote in her Instagram Stories. “If women have conflict that’s between them NOT YOU.”

The “I Love Me” singer asked her followers to focus on social justice issues, such as seeking justice for Breonna Taylor. Then, she addressed the sudden interest in her love life. The interest began when Demi and Max displayed PDA on social media. The couple loves to share romantic messages on each other’s Instagram account, much to the chagrin of their followers. However, she understands the sudden interest in their love for one another.

“But then I stop and think… it’s hella rude but damn.. I get it,” Demi continued. “And I don’t wanna look at what’s really happening in the world either but WE HAVE TO. Yes, it’s easier to tear apart celebrities and their relationships because 2020 sucks and scares the s*** out of us all but it’s only gonna stay terrifying until we address it all and WORK ON SOLUTIONS TOGETHER.”

Then Demi revealed that Max’s tweets about Selena were “doctored.” She advised her followers to “put on your adult underpants” and “write about what actually matters.” Max has yet to speak out about the accusations.

While Demi Lovato claimed that most of the tweets are fake, fans said that only the tweet where he says Selena is prettier than Demi is Photoshopped. However, all the other tweets and social media messages appear to be real. There are several threads on Twitter, with a lot of evidence to dig through.

In addition, Max’s alleged comments about Ariana Grande and Miley Cyrus have also gone viral. His comments about Selena went viral because of Demi’s falling out with the “Rare” singer. In one old clip circulating on social media, Max gushes over Selena, revealing that he had a “major crush” on her since 2010.

You can literally see here he’s said the exact same thing as he did to every other celebrity and demi was the only one to let him in her life. Max is using demi to boot his career and it’s worked. i really do feel sick pic.twitter.com/Yn49Ovlr2r

trying it with madison beer… pic.twitter.com/gJxyh8TszK

no he was fully obsessed pic.twitter.com/Sm82UtwiVt

Demi and Max became engaged in July after six months of dating and quarantining together. She admitted that quarantine “accelerated” their relationship. She also wrote her new song “I Love Me” the day they met. The song now has a double meaning since his initials are M.E.