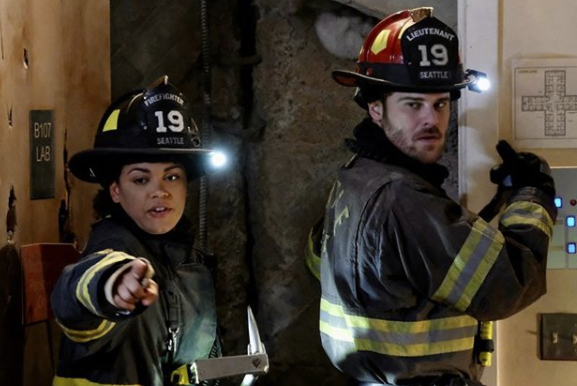 The Coronavirus pandemic affected the vast majority of our favorite television shows in some shape or form. When the writers brainstormed ideas for future plot points, the probably never imagined “global pandemic” would be part of the plan.

Many shows halted production, including Station 19. However, the team recently received the green light to resume production. E! News recently sat down with Station 19 star Boris Kodjoe about what viewers can expect from the upcoming season.

Station 19 Writers Are Passionate About Storytelling

Station 19 and its sister show Grey’s Anatomy rarely shy away from tackling major social issues. Kodjoe says he believes the new season will deal with a lot of the issues that developed in the United States over the last several months.

“I think it’s important that we honor both,” Kodjoe says, regarding Coronavirus and the Black Lives Matter movement. “I think it’s important that we tell stories that people can relate to because they can identify with them. That’s also been a strength of Krista Vernoff and Shonda Rhimes, to really sort of hone in on real life and how people live and fears and hopes and aspirations that people really have, and speak to that unapologetically and in a way that is honest and authentic.”

Krista Vernoff is Station 19‘s showrunner and Shonda Rhimes is its executive producer. Both are very vocal about social justice issues and it really shows in their work.

There is No Shortage of Material This Year

“I think we have to show what’s really happening,” Kodjoe continues. “At the intersection of Amy Cooper and George Floyd, there was a silver lining that produced this overwhelming global response, and as a result, this movement that is so necessary. I think that it was a perfect storm, with the pandemic forcing everybody to pay attention and not to be distracted by anything else. The weaponization of a phone call by a white woman in Central Park and the terrible tragic visual of the knee on the back of George Floyd’s neck—I think all of those things contributed to this tidal wave of emotions and consequently a total boost of this movement in the absolute right direction.”

Kodjoe goes on to say that he also hopes Station 19 can pose some solutions to these current issues. Only time will tell.

Krista Vernoff already announced she believes the show will take a very dark turn this year. Station 19‘s lead character Andy Herrera definitely had a rough time last season, and she’s in for more drama. It really sounds like fans are in for a wild ride this year.

Follow TV Shows Ace on social media for all the latest news and updates regarding Station 19.

‘Sister Wives’ Christine Brown Organized Something Amazing For Family
Pregnant Jill Dillard Livin It Up With All Her Boys
‘Unexpected’ Fans Fear For Kylen & Jason’s Son: Why?
‘Bold And The Beautiful’ Spoilers: Wyatt Returns As Dad’s Sounding Board
Lifetime’s ‘Revenge Best Served Chilled’: All The Details