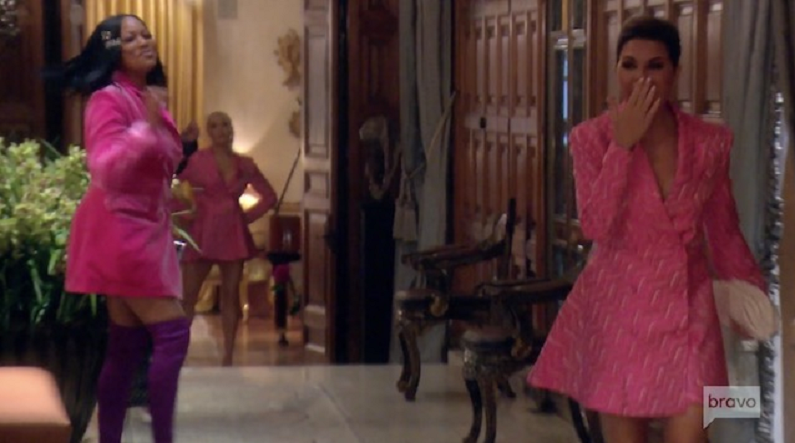 RHOBH fans are not happy with Garcelle Beauvais. At first, she became a fan-favorite for her cool and relaxed demeanor. She has a laid-back approach to handling drama. But viewers think she may be as mean as the rest of them. Some are demanding Garcelle to apologize to Lisa Rinna for dissing her.

On Wednesday night’s episode, Garcelle mentioned Rinna’s daughter’s “body image issues.” In her confessional, she was honest about what she thought about Rinna’s dancing videos on Instagram. While she loves how “free” her co-star is, she doesn’t think it’s healthy for her daughter to watch those videos. Now, RHOBH fans want Garcelle to apologize to Rinna.

As TV Shows Ace previously reported, Garcelle Beauvais threw major shade during her at-home confessional on Wednesday night’s episode. During the group trip to Rome, Italy, Kyle Richards asked Lisa Rinna what her mom, Lois, thought about her provocative dance videos. The actress mostly loves to dance around in her underwear.

Rinna said that it’s great for her mom to see everything that happens. Garcelle shared her input during her at-home confessional.

“I love that Lisa’s free enough to do the videos and be dancing, but the dancing nearly naked is not a choice for me if I had a daughter that had boy issues,” her RHOBH co-star said.

Rinna hasn’t fired back at Garcelle. But fans are on #TeamRinna and want Garcelle to apologize STAT. It all started when Rinna posted an old clip of Lucille Ball dancing on what would have been her 109th birthday. RHOBH fans slid into the comments section and bashed Garcelle for making the comment in the first place.

“Garcelle needs to apologize, her comment last night about you dancing negatively impacting your daughters [sic] eating disorder was uncalled for,” one follower wrote. “She just wants to be on the show next season so she’s going at everyone in her confessionals to stir things up. Rise above it!!”

“What a s***ty comment about Lisa Rina’s dancing …. her daughters [sic] problem is NOT her fault….” a RHOBH follower wrote.

But Garcelle hasn’t responded to the backlash.

Garcelle Beauvais really upset fans. They claim that she shouldn’t have gone after Rinna’s daughter, Amelia Hamlin, who struggles with multiple mental health problems. They thought she was crossing the line when she brought up the 19-year-old model. RHOBH fans argue that Rinna’s not at fault for her daughter’s eating disorder.

Amelia first addressed her eating disorder back in 2018. Fans saw her overcome her struggles and recovery on the show. While most don’t agree with Rinna forcing her daughters to film, most were mixed over Garcelle’s response to Rinna’s dancing videos.

When @badgalriri sends you @savagexfenty 😻😻😻😻 you DANCE. Periodt.

As per The Blast, Rinna did side with the RHOBH fans. She responded to a series of comments that claimed that Garcelle crossed a line.

“The only person that comment hurt was Amelia. If Garcelle wants to take a dig @Rinna it’s fair game. But using the eating disorder to make the dig was a low blow,” one user commented to which Rinna responded, “Yes Chrissy.”

Do you agree with the RHOBH fans that Garcelle should apologize to Rinna? Sound off below in the comments section.