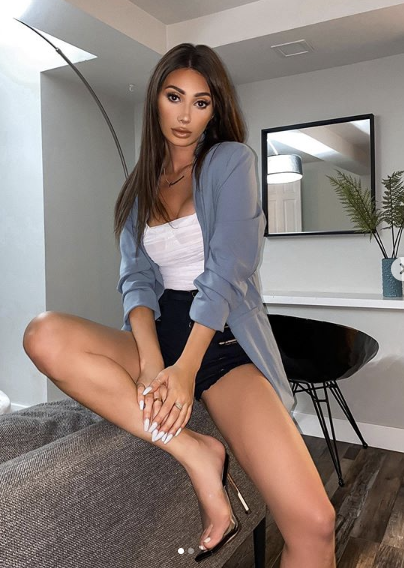 Harry Jowsey and Francesca Farago are over, and now the pair are moving on with different people. Harry only dumped Francesca about a month ago, but it’s clear he’s ready to move on. Now, Francesca seems happy to move on as well. She was seen on a romantic date with Jersey Shore star, Vinny Guadagnino.

Francesca is Living Her Best Life

Although Francesca was initially devastated over her breakup with her Too Hot to Handle co-star, she seems to be living her best life these days.  She frequently posts photos where she models new, beautiful summer fashions around her home. If she’s still reeling from her breakup with Harry, we hardly noticed. There’s nothing a few new outfits can’t fix, right?

Harry Chimes in With His Side of the Breakup

A few weeks ago, Francesca posted a video detailing her side of the breakup. Now, Harry has posted his response.

In the video, Harry admits to being the one who ended the relationship. He cites long distance as one of the primary reasons, but also partially Francesca’s behavior. Harry sats he was going through a difficult time while she was “off doing her own thing.”

Harry seems genuine in the video, but fans remember he has an honesty problem. During Too Hot to Handle, there were several instances where Harry bent the truth to make himself look good, or just flat out lied to the group. Rumors about Harry’s infidelity have been circling for a while. We can’t help but wonder if that has something to do with the breakup.

During the Too Hot To Handle reunion special conducted via webcam, Harry proposed to Francesca with a ring pop, and she happily accepted. They seemed to happy and in love. Hardly anyone could have predicted there was trouble in paradise. The pair posted their respective breakup videos just a few weeks after the reunion special aired. Francesca was willing to work things out, but Harry seemed ready to just move on.

Francesca and Harry kept their relationship a secret for about a year, as per their contracts with Netflix. That sort of pressure definitely took its toll on the couple. Long distance and the Coronavirus pandemic didn’t help matters either. No matter the real reasons behind the breakup, it seems the two are better off apart.

Like Harry, Vinny Guadagnino also has a tom-cat reputation. It seems that Francesca is sticking with her type.

What do you think of Francesca’s new beau? Will this work out long-term, or do you think the two are just having fun? Let us know in the comments. As always, make sure to check back with TV Shows Ace to stay informed on all the latest reality TV news and gossip. We hope to see you very soon!

Paedon Brown Makes Mockery Of Kody With Latest Comment
‘When Calls The Heart’ News: All Eight Seasons To Be Available On This Streaming Service
Rachel Lindsay Shares Update On Relationship With Chris Harrison
‘Below Deck’ Jean-Luc Cerza-Lanaux Breaks His Silence On Dani’s Baby
Erika Jayne Is Sixth Celebrity To Join ‘Celebrity Big Brother’?