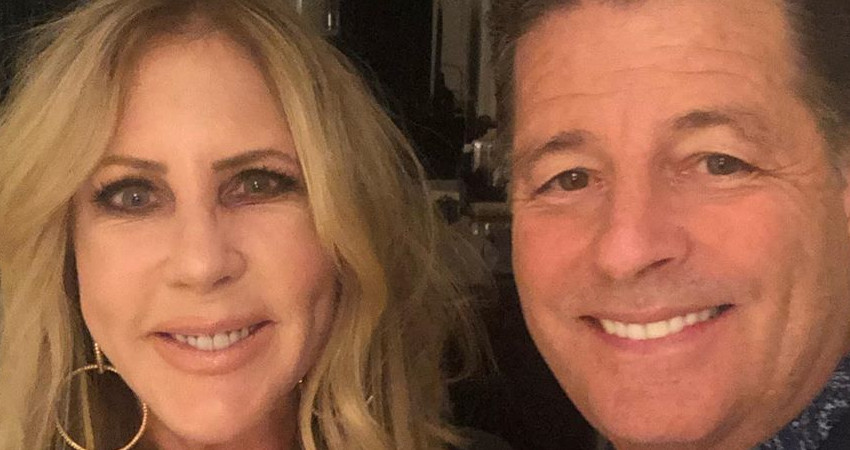 The Real Housewives of Orange County star Vicki Gunvalson is still coming to terms with her firing. Six months after announcing her exit from the Bravo show, she has some theories about why she was let go.

As fans know, Vicki was an original cast member of the first Real Housewives franchise. After 14 seasons with the show, she chose to walk away rather than return in a ‘Friend’ role. Vicki’s BFF and RHOC co-star Tamra Judge also quit after Season 14.

Vicki originally said she was let go over her refusal to accept a lesser role. Now she wonders if there’s another reason: her fiancé’s political views.

Steve and Vicki began dating back in 2016. Fans saw some of their relationship play out on RHOC. He finally popped the question in early 2019. The couple were planning a 2020 wedding, but those plans are on hold due to the coronavirus pandemic.

Steve was a guest on a recent episode of Vicki’s Whoop It Up With Vicki podcast. Vicki began to talk about her exit from the Bravo show. She rhetorically wondered if Steve coming into her life, making her happy and content, played into Bravo letting her go without a fight.

Vicki wondered if the network saw her life as “too normal” with Steve. Her fiancé retorted that life is never “normal” with Vicki. However, he did have a shocking allegation about Bravo. Reality Blurb reports that Steve said Bravo “[doesn’t] like conservatives.”

The RHOC star admits that she wondered herself if Steve being “very conservative” didn’t “bode well with a very liberal network.”

In fact, she suspects that his political views did harm to her future on the show.

Steve Doesn’t Know How to ‘Whoop It Up’

Not only is Steve conservative, he’s also “boring,” Vicki says. This isn’t the first time Vicki has spoken out about her fiancé’s inability to “whoop it up.” Back in April, Vicki spoke with a relationship expert on her podcast. At the time, she said Steve doesn’t fill her “love tank.”

During last week’s podcast, Vicki says that Steve is on the “boring level.” The RHOC star addresses Steve directly when she says, “You don’t know how to ‘whoop it up.’ I’ve tried to teach you.”

She further wonders if Bravo felt Steve was “bringing [her] personality down.”

However, she also says that she “loves” that he plays it safe and isn’t controversial. But she doesn’t think that Bravo loved it.

In March, Vicki revealed that her daughter, Briana Culberson, might have coronavirus. Luckily, her test was negative. However, another test taken around the same time was very positive: Briana is pregnant.

The RHOC star will get another grandson in a few months. Briana doesn’t have social media, but her husband, Ryan, often shares updates.

Two weeks ago, he shared with his followers a photo of Briana’s growing ‘baby bump.’ He noted that due to her keto weight loss, she isn’t showing very much. Briana and Ryan lost a combined 125 pounds on the keto diet.

7 weeks ➡️ 15 weeks progress Still waiting on the baby bump to really pop out but with her staying keto who knows how long it’ll take to really show. #ketopregnancy

Vicki shared a photo over the weekend of Briana, Ryan and her grandsons. She told a follower in the comments that she’s spending the week in North Carolina with her daughter and family. In the photo’s caption, Vicki gushes over Briana being “17 weeks pregnant.”

My beautiful daughter at 17 weeks pregnant with Ryan and my beautiful grandsons. Happy Father’s Day to all the fathers, stepfathers, father’s in heaven, fathers to be and anyone who plays a father’s roll. Enjoy your special day. #fathersday #missmydad❤️ #greatfood #socialdistancing

While Vick is no longer on RHOC, she has some secret show in the works with former co-star Tamra Judge. Check back with us for details about the new show when they become available. Season 15 of RHOC should resume filming soon and be on your TV later this year on Bravo.